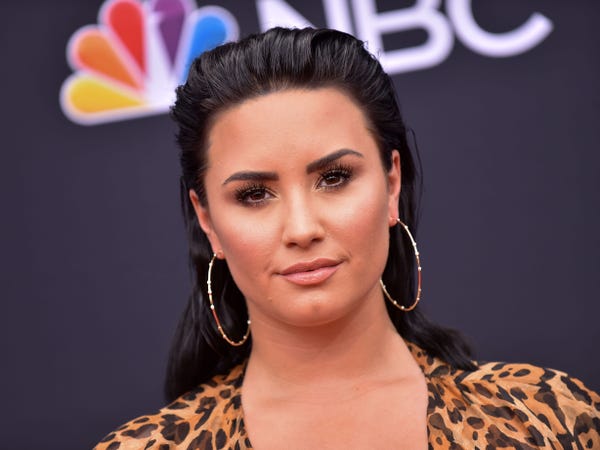 Demi Lovato is facing criticism from fans for telling people to focus on Breonna Taylor, a Black woman that was shot and killed by police officers in her home in Louisville, Kentucky, instead of the purported screenshots of her fiancé Max Ehrich's old social media posts.

Over the weekend, online users circulated what they claim were screenshots of the actor's social media posts about Selena Gomez, Lovato's childhood friend, making it appear as though he sent flirtatious comments to the "Lose You To Love Me" singer.

Users also posted an old Instagram Live video that appears to show Ehrich talking about his "major crush" on Gomez and his desire to collaborate with her.

Lovato, who began dating Ehrich earlier this year and got engaged to him in July, called the images "fake" in a statement she released on Instagram Sunday evening.

"Don't y'all have more important s— to write about in 2020???" she wrote, adding, "I challenge any tabloid that dares to type my name to mention Breonna Taylor and the fact that her murderers still haven't been arrested. WRITE ABOUT THAT."

Though the "Sorry Not Sorry" singer has been a vocal supporter of the Black Lives Matter movement, many fans thought it was inappropriate for Lovato to include Taylor's name in a statement shielding Ehrich, a white man, from internet drama.

Some individuals pointed out that while it's important to draw attention to Taylor's case, she shouldn't be used as a "scapegoat" to "deflect" from celebrities' personal matters.

Though Lovato's decision to include Taylor's name in her statement drew backlash, some people pointed out that she's used her platform to spread awareness about Taylor in the past.

On Lovato's 28th birthday in August, she launched the Propeller campaign in honor of Taylor. The initiative automatically generates prewritten letters to send to the Louisville mayor and chief of police demanding justice for Taylor, along with petitions and donation links.

"No matter how big or small you think your impact may be, if we all stand together we can help bring justice for Breonna Taylor," Lovato wrote.

I’m so lucky to be here today and to have made it to my 28th birthday. Join me in taking a stand for Breonna Taylor. Use my link in bio 🖤🖤 #BlackLivesMatter

26-year-old Taylor, an emergency medical technician, was shot eight times after three Louisville Metro Police Department officers — Sgt. Jonathan Mattingly, Brett Hankison, and Myles Cosgrove — entered her home shortly after midnight using a "no-knock warrant" during a narcotics bust on March 13. The FBI is conducting an investigation, but none of the police officers have been arrested or charged.

Following the news of Taylor's death, many celebrities have demanded the arrest of the police officers that shot Taylor.

John Legend penned an essay for Entertainment Weekly that called on government officials to arrest the officers and charge them with second-degree murder, Beyoncé published an open letter to Kentucky's attorney general demanding the officers' arrests, and many other celebrities shared petitions and information about the case on social media.