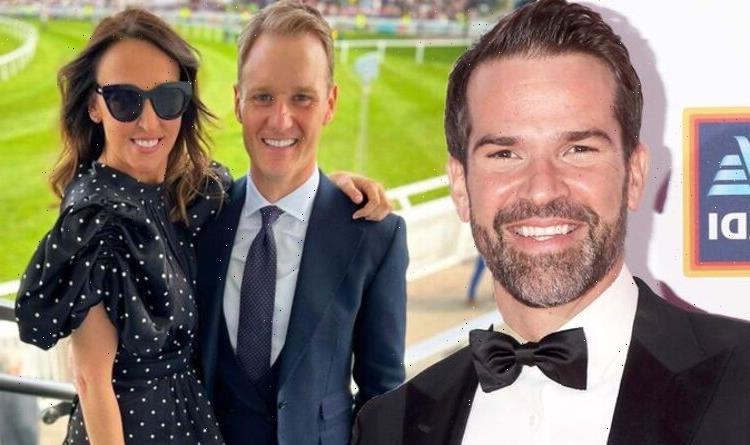 BBC Breakfast presenter Sally Nugent became the subject of a cheeky joke between her BBC co-stars Gethin Jones, 44, and Dan Walker, 45, after the latter uploaded a picture to Twitter during their day out at Aintree Racecourse yesterday. Dan and Sally, 50, enjoyed yesterday a day out at the races and managed to capture a snap to immortalise an “impressive” moment.

Dan shared the picture in view of his 753,000 followers, with the caption: “What a gorgeous day at Aintree with my professional partner.”

However, the picture caught Gethin’s attention because the angle from which the pair were photographed made Sally look like she was floating.

Jokingly, Gethin enquired: “Did @sallynugent float into this picture?!”

Sally recently paid tribute to Dan after he announced he will be leaving BBC Breakfast as a presenter to move over to 5 News on Channel 5.

She broke her silence on Dan’s departure in a tweet shared with her 144,000 followers.

The presenter responded to Dan’s retweet of Channel 5’s announcement as the move was made official.

Sally wrote: “We’re not just colleagues but we’re friends too.

“Dan is simply brilliant to sit next to. I will miss him. Go and be fabulous,” she added.

Dan emotionally replied: “You’ll set me off. See you in the morning, partner.”

He tweeted: “Dan Walker has been a brilliant Presenter on #BBCBreakfast for more than 6 years.

“From Tony’s flypast and highlighting loneliness with Terrence to special programmes including live from No 10.

“Thanks for your time on the red sofa and your friendship to all on and off screen.”

Dan replied: “I love everything about #BBCbreakfast from the boss to everyone who works on the show.

“It’s been an amazing 6 years with an incredible team. It was a big decision to leave but I’m also so excited about a new challenge. Thanks for all the lovely comments.”

The former BBC star issued a statement outlining his new role on Channel 5.

He said: “I can’t wait to get stuck into the daily news show, but I am also excited about making some great new TV for Channel 5.

“I love their ideas and creativity and it’s rare to get an opportunity like this where paths and ambitions meet.

“The chance to do something different was too good to turn down.”