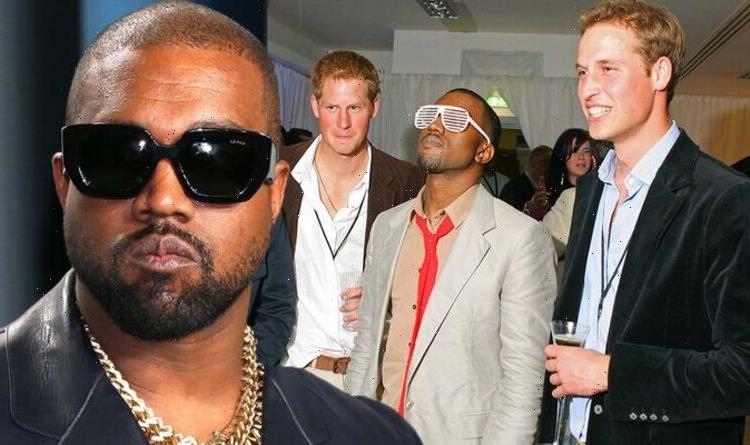 Kanye West, 44, reportedly disagreed with Princes William and Harry after they pointed out he was wearing “bling” when they first met. The music star “didn’t have the heart” to tell Prince Charles’ sons he did not like showy jewellery.

According to The Guardian, upon meeting Kanye, Harry and William were discussing whether his eyewear was “bling”.

The news outlet quoted Kanye as saying: “One of [the princes] said, ‘I thought those glasses were bling’ and the other one said ‘It’s Kanye West, they’d have to be bling.’

“I didn’t have the heart to tell them that I’m the anti-bling.”

Kanye has recently been controversially embroiled in a public divorce battle with Kim Kardashian.

The rapper and the reality star, who share four children together, have separated after nearly seven years of marriage.

Kanye said he did not want Kim’s new boyfriend, Pete Davidson, to see their children North, Chicago, Psalm and Saint.

He also branded Pete a “loser” and called on fans to “scream” at the Saturday Night Live star if they saw him out and about.

The conversation was made public in a series of screenshots of text messages shared by the Gold Digger star to his social media on Monday.

In the snaps, Kim told Kanye he was “creating a dangerous and scary environment and someone will hurt Pete and this will be all your fault.”

The rapper replied: “I will always do everything to protect you and our family forever.

“And I listened to you and told everyone to make sure nothing physical happens to Skete.”

The post also featured a shot from the 2001 film Baby Boy in which Ving Rhames put Tyrese Gibson in a chokehold.

Kanye captioned the post: “UPON MY WIFE’S REQUEST PLEASE NOBODY DO ANYTHING PHYSICAL TO SKETE IM GOING TO HANDLE THE SITUATION MYSELF.”

The scandal has led to scrutiny towards the former couple, with celebrities from all over the world publicly weighing in.

Former Good Morning Britain star Piers Morgan hit out at Kanye for his “vile” behaviour and admitted to booing him when he appeared at the Super Bowl on Sunday.

In a column for the New York Post, Piers wrote on Monday that Kanye looked “bl**dy ridiculous” at the event, which took place in California’s SoFi Stadium.

He added: “The crowd, which had been raucously cheering every famous face that appeared on screen, suddenly began booing and jeering.

“I’m proud to admit I was one of them, because if anyone deserves such an outpouring of public disapproval right now, it’s surely this narcissistic, jumped-up buffoon.”

Piers continued: “Now, since their bitterly acrimonious break-up and vicious ongoing divorce battle, we’re seeing the full range of Kanye’s horribly selfish and frankly, vile character – and it stinks so pungently that a Super Bowl booing should be the least of his punishments.”