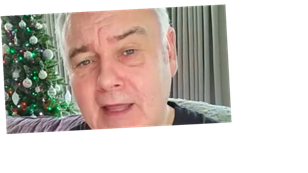 Eamonn Holmes has revealed he suffers from chronic pain, which has turned him into an insomniac.

The 61 year old, who recently shared a rare snap of his lookalike son in honour of his 19th birthday, took to his Twitter account in the early hours of the morning to share his struggles with his 1million followers.

Sitting up at 2:32am, he wrote: "In that Twilight Zone between Night time and Morning. Anyone else find these Hours the worst…. particularly if you suffer Chronic pain ?" [sic]

Many of his fans could relate and empathise with what he's been going through as one person spoke about how playing hockey has "taken a toll" on her knees and she's damaged her coccyx, too.

Eamonn replied to her, saying: "No one told us all the pleasure would lead to this pain Kate. Thinking of you . Hope u can fall asleep again.." [sic]

Replying to several other messages, the TV star revealed various details about his condition as he wrote: "Like me Night is Worse …. why is that ?" [sic] with a thinking emoji face.

Explaining that he feels as though he's trapped in a cycle, he responded to another fan by writing: "No escape Emma is there ?" [sic] alongside an unamused face emoji.

Eamonn, who recently slammed Meghan Markle's "tell all" interview with Oprah Winfrey and said it was an "advert", later revealed the reason he shared his pains.

He wrote: "I just want people who suffer to know there are others Tricia and maybe they can talk to each other and swop advice on here ?"[sic]

It comes as Eamonn's wife Ruth Langsford recently revealed the nickname her husband goes by behind closed doors.

Following the advice from media gardener Monty Don to keep your grass long and uncut, the four hosts discussed their own garden care.

Monty said: "Cutting grass burns lots of fossil fuel, makes a filthy noise and is about the most injurious thing you can do to wildlife."

"Whereas letting grass grow which is, after all, a pretty passive thing to do, is probably the single most effective thing you can do in any garden of any size to encourage particularly insect life, but also small mammals, invertebrates, reptiles."

In response, Ruth shared that she sent the article to her husband of 11 years Eamon, 61, as he was proud of their "stripy" lawn.

"I screenshotted it and sent it to Eamonn and he'll be fuming because he loves his stripy lawn,” the TV presenter revealed.

"What is it with sheds and lawns? When they get to 45 or 50 they suddenly become obsessed with the lawn,” Ruth joked before revealing the hilarious nickname she calls her husband.

"Eamonn wasn't like that when I met him,” she continued. “We call him the lawn police.

"I used to stand at the kitchen window with Jack and say 'look, the lawn police are out',” Ruth laughed. "He walks with his hands behind his back and it's really strange isn't it. They get this obsession."