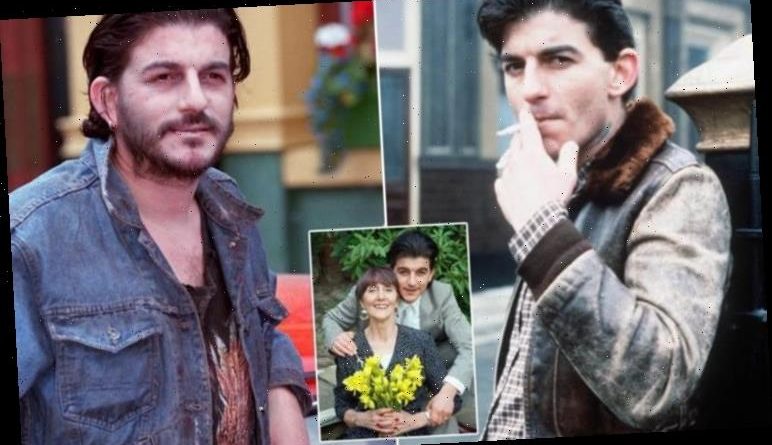 EastEnders: Lucas smashes a glass against the wall

“Twice now I’ve asked people in the Post Office where their masks are,” he says. “It makes me mad. One of them got quite agitated, saying, ‘Who are you to talk to me? Who do you think you are?’ “But when I asked again, his excuse for not wearing one was, ‘I’m not from round here’.” John laughs. “The other guy said, ‘It’s in the car’.” The Reading-born actor is best known for playing Nasty Nick Cotton in EastEnders. “Someone says ‘Hello ma’ to me almost every day,” he says. “People don’t come close, though they tend to shout from a distance. They’re probably worried I might have a knife.”

“Nasty Nick always did. He was a terrific character, like King Rat in a leather jacket, and he plagued the BBC soap from the first episode in February 1985 until his death from a heroin overdose in 2015.

“He was a horrible, drug-dealing, racist thug who robbed his mother and had the highest murder count on the Square,” John says. “Yet people liked him.”

“He shakes his head. “I once had a group of Rastas stop me and offer me a blast on their joint. I wouldn’t have thought they’d have liked someone like Nick but they did.”

Why so? “He had classic lines and a twinkle in his eye.”

In real life John, 68, made a pretty vicious enemy – the late Sid from the Sex Pistols. He was living in West London; Sid Vicious and girlfriend Nancy Spungen and Heavy Metal Kids star Gary Holton (Wayne in Auf Wiedersehen, Pet) were all part of the same loose Maida Vale 70s punk community. 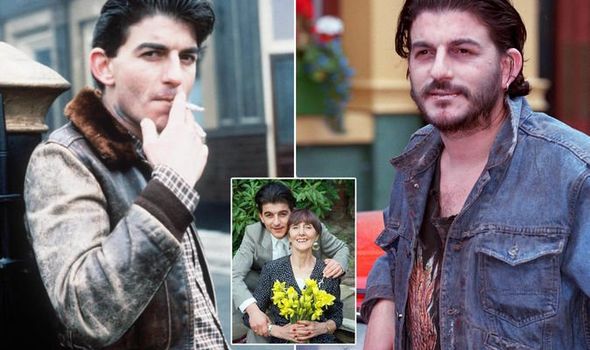 “One time after a blazing row, Nancy poured her heart out to me when Sid was out scoring drugs. When he came back, she told him about it, saying, ”this really nice guy, Johnny, was round here and he listened to me.

“Sid went out of his mind with jealousy. He wanted to beat me up. He was raging! He went out looking for me and found my mate Mark Evans who looked just like me – same hair, same jacket. Sid went straight for him with his leather belt and gave him a lashing.” He laughs. “My one and only Sex Pistols story and I missed all the action.”

Altman, born John Stewart, has had one foot in acting and the other in rock since his teens – his album, Never Too Late To Rock & Roll, is out now.

“The Beatles made a real impact,” he recalls. “I heard Please Please Me and my ears pricked up. Playing George Harrison in The Birth Of The Beatles was one of my proudest moments.”

He was 15 when The Who played Dreamland, Margate. “Me and a mate got there early for the Saturday morning pictures then sneaked into the main ballroom and hid in there all day. We even got into The Who’s dressing room and left graffiti – ‘Smash your kit up, Keith!’ 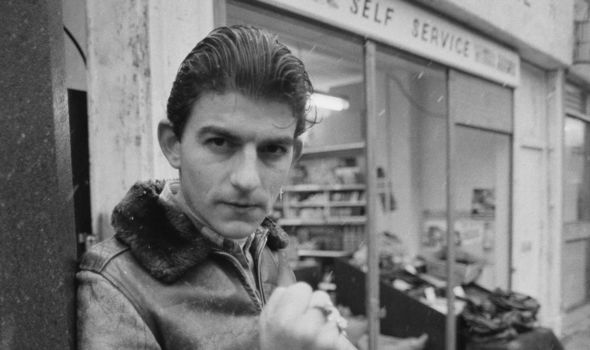 “‘The gig was sensational. We were so close to the stage Daltrey’s sweat was flying over us. We went back and got their autographs but missed our train. As we were hitchhiking home, a big Lincoln Continental pulled over. My jaw dropped – it was Pete Townshend and his wife. He bought us chips and lemonade and dropped us home to Herne Bay.

“We went to school on Monday morning and nobody believed us. By then rock was in my blood.”

Altman met Jimi Hendrix in Chatham on his Wild Things tour with Pink Floyd, The Move and several more.

“December 1, 1967,” John recalls. “Three of us bunked off school, got to the theatre early and helped load in the gear. Suddenly we were inside with mega stars.

“We got into Jimi’s dressing room. I had a little tape recorder and interviewed him. He showed us the cine-films he was shooting and his new album Axis. He was so laid back and gentle. He told us: be as good as bunnies because you know what they do all day.”

“John’s musical career began in The Pip Simmons Theatre Group, a theatrical rock company who toured Europe performing in a production of Dracula that began with the cast naked. “I met them in Leicester in ’77, sat in on drums, and the director asked me to audition. I sang some Beatles songs, got the job and we went straight to Paris.” 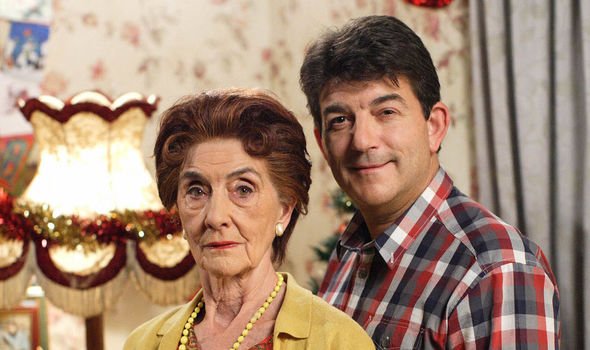 His first film role was a pickpocket in The Great Train Robbery “I was cast as a baddie from a young age,” he says. Next was Quadrophenia. Sting beat him to the part of Ace Face, so “they asked me and Danny Peacock to be extras with a bit of dialogue. I’d have swept the floor to be involved!”

“A drummer and guitarist, John has been in bands off and on for the decades, including The Hitmen, Resurrection, and most famously the Heavy Metal Kids in 2010 when he replaced his late mate Gary Holton on lead vocals.

“I loved it,” he says. “Gary was a hard act to follow. I saw them once at the Music Machine in Camden and he was climbing the curtains.”

Despite playing Billy Flynn in the touring version of Chicago, the biggest live crowd John has entertained was a Leiber & Stoller tribute night at Hammersmith Odeon. “I sang Trouble of course.” 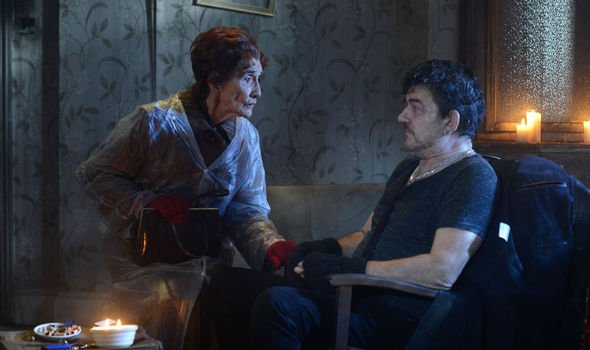 He has fond memories of working with screen mum Dot Cotton (June Brown). “We had a scene in the launderette but at the end, nobody called ‘cut’ so we just carried on in character making it all up,” he smiles.

“Up in the box they were going through their scripts assuming they were missing pages. ‘Have you got this bit?'”

Altman covers his marriage breakdown in his autobiography, In The Nick Of Time (now also an audio-book). He married Bridget Poodhun in 1986, less than a year after they’d been introduced by his co-star Nejdet “Ali Osman” Salih.

Drinking and cocaine consumption played a large part in their 1997 divorce, John admits. He gave up both but by then, it was too late.

Daughter Rosanna and her daughter now live in Luxembourg. 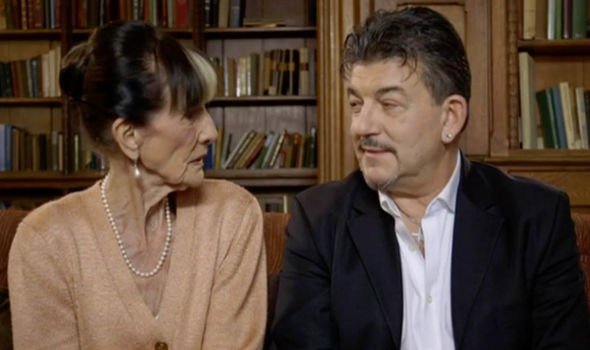 He relaxes by watching movies and listening to music – he’s a recent convert to Joe Bonamassa. “I also walk, cycle and work out in the open air with Jacob Peregrine Wheller, a Ninja Warrior finalist,” he says. “I try and do something for someone else every day.”

“Altman gets worked up about international affairs and repression everywhere from Turkey to Russia via the Palestinian territories. “I hate to see people persecuted,” he says. “It makes you thank God you’re here in England where the worst you have to suffer is an idiot with road rage.”

• Never Too Late To Rock & Roll by Johnny Altman is out now, produced by Mark Christopher Lee