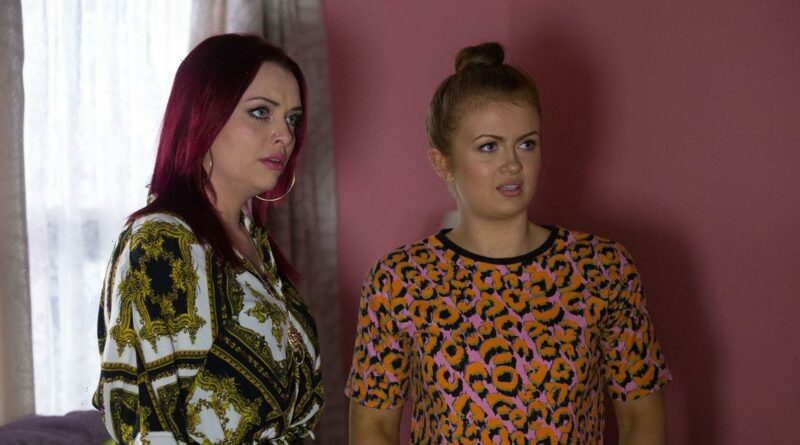 EastEnders’Maisie Smith and Shona McGarty have taken to TikTok to showcase their red hot dance moves.

Maisie, 20, who recently quit her role as the well-loved Tiffany Butcher in the BBC One soap, shared a TikTok video of her and Shona, Whitney Dean in the soap, dropping it like it’s hot.

Sharing it with her 2.2 million TikTok followers, the video of the on-screen sisters currently has racked up 6.4 million views.

Commenting on the video Maisie said: “Happy Birthday to my big sista!”

She then shared the video to her Instagram Stories, saying: “30 is just the beginning baby girl.”

Fans were impressed with the duos moves and commented on the TikTok video with birthday messages and praise.

“I literally can’t stop watching this!!,” one fan said.

Shona left both heart and laughing emojis on the post of her high kicking performance, and fans loved seeing that they “both get along on screen and off.”

The video shows the pair tearing up moves, possibly backstage on set, in tracksuits and T-shirts, dancing to Woman by Doja Cat.

Maisie is a pure triple threat and previously, left fans with 'goosebumps' as she showed off incredible singing voice, and was a regular on Saturday night viewing while on Strictly Come Dancing.

Partnered with pro-dancer Gorka Marquez, Maisie took part in the 2020 series and performed audience wowing routines such as the Quickstep, Samba and Jive.

Making it to his second ever Strictly final Gorka, 31, and Maisie narrowly missed out on taking home the trophy to Bill Bailey and Oti Mabuse.

Maisie has been on the soap since 2008 and recently, EastEnders confirmed that she will exit after 13 years of playing Tiffany Butcher.

Walking into Albert Square when she was just six years old, Maisie has already filmed her final scenes and will be departing from Walford towards the end of the year.

Maisie said when breaking the news: "I’m very excited for my next challenge and thank the BBC for the opportunity they gave me as a 6 year old."

She will be missed not only by fans but by the cast and crew.

Show producer Jon Sen said: "We are all very sad to see Maisie leave. She's been a wonderful company member during her time at EastEnders and it's been a privilege to see her blossom into the star she is.

"She has created an iconic character in Tiff and the door is always open to her return. We wish her all the very best for her future projects."

Stay up to date with all the latest on Maisie Smith and your favourite stars by signing up to OK!'s daily celebrity newsletter.