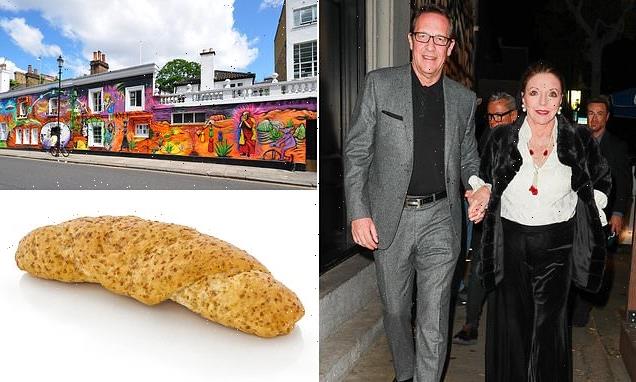 In a scene that wouldn’t be out of place in Eighties soap opera Dynasty, Dame Joan Collins had a bread roll viciously lobbed at her at a swanky private members’ club.

The ‘frightening’ confrontation led to the roll-thrower being banned for life — and the man she was a guest of (who also happens to be a lord) having his membership of Chelsea Arts Club suspended.

Dame Joan, 88, tells me of the incident, which occurred when she was out celebrating with a friend earlier this year. 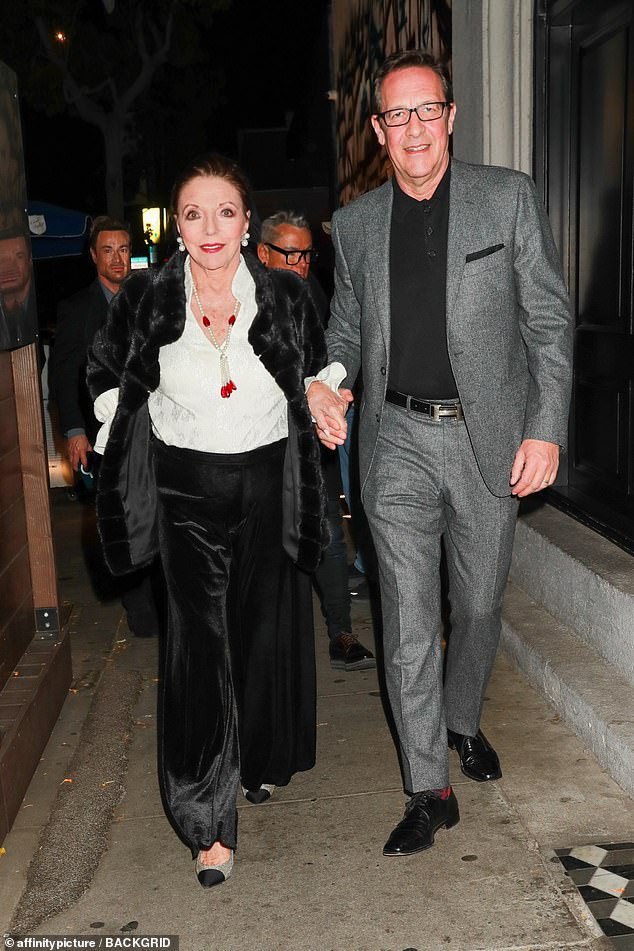 In a scene that wouldn’t be out of place in Eighties soap opera Dynasty, Dame Joan Collins (pictured with Percy Gibson) had a bread roll viciously lobbed at her

She says: ‘A drunken diner who inappropriately wanted to sit with us got upset and threw a hard bread roll at me, and she didn’t even have the decency to follow it up with the butter.

‘It was a private dinner for a friend’s birthday, my once PR Stella Wilson.’

Nobody in their small party knew the bread roll-thrower.

Joan’s long-term friend Stella, who is now retired, tells me: ‘Joan understandably was upset. Nobody likes to have something thrown at them. 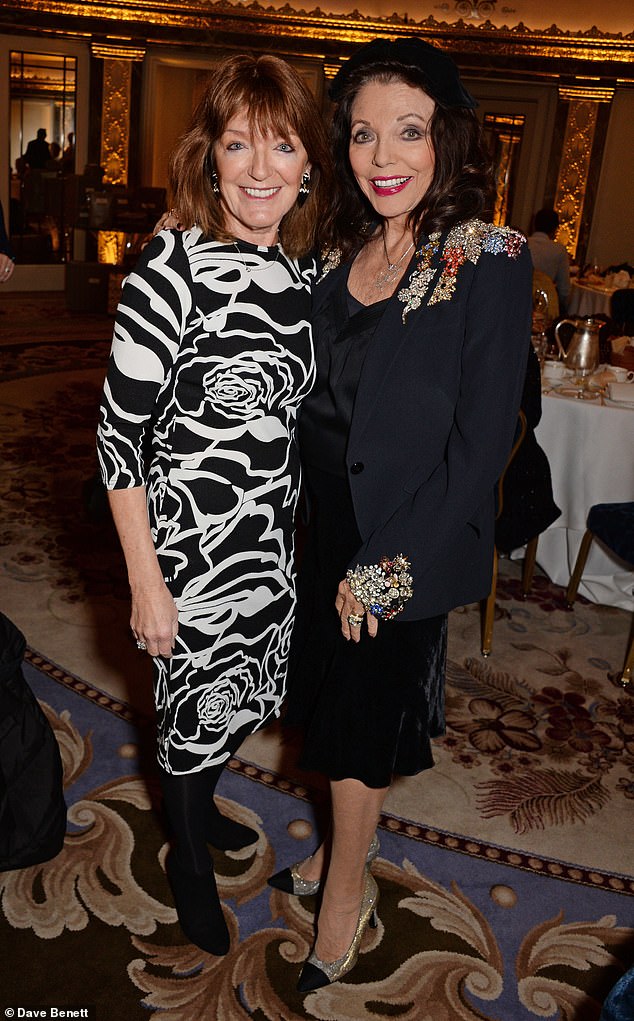 Stella Wilson and Dame Joan Collins in 2018. Dame Joan, 88, tells me of the incident, which occurred when she was out celebrating with a friend earlier this year

She and [her husband] Percy left. I was disappointed she had to miss the rest of my birthday but I completely understood why she left. I would have walked out too. Thank goodness it was only a bread roll. That was the frightening part of it.’

Stella says the woman came over to their table and was ‘swaying around and not making any sense’.

‘She knew who Joan was because she told her, “I have always admired you.”‘

The woman was then persuaded to return to her table, at which point she took the bread roll and threw it directly at Dame Joan. 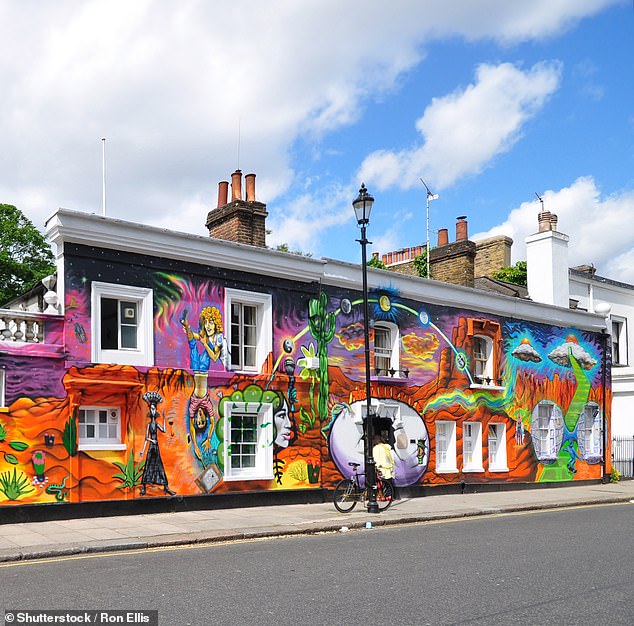 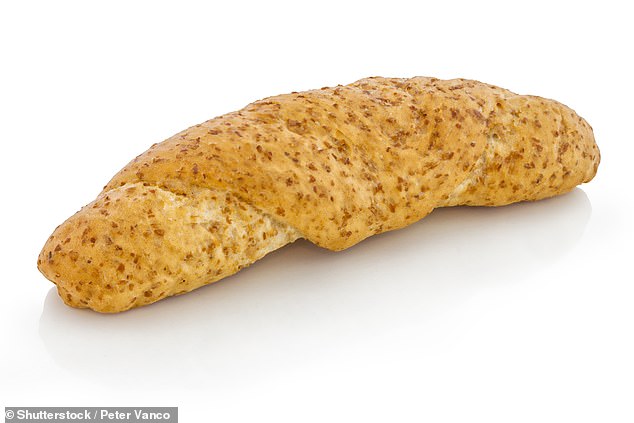 The woman was then persuaded to return to her table, at which point she took the bread roll and threw it directly at Dame Joan. Stock photo used

‘None of us could understand why she threw it,’ Stella says. ‘It was an upsetting incident for everybody.’

It operates under strict rules, with the use of phones or computers not permitted and photography ‘strictly forbidden’.

The Club told me it ‘absolutely’ can’t comment on the story due to the nature of a private members’ club.

In his new book, Queen Of Our Times, my colleague Robert Hardman reveals that having given up his ministerial car to cut costs, then Culture Secretary Jeremy Hunt decided to walk to the Palace for his first audience with the Queen.

Arriving at the wrong gate, the bewildered MP was blocked by the Changing of the Guard. ‘Sweating profusely,’ he says, ‘I finally arrived with 30 seconds to spare. The courtiers were all in a bit of state.’

Hardman will be chewing over the whole reign on March 28, along with fellow royal biographer Dame Joanna Lumley, at a ‘celebration of the Queen’ at London club 5 Hertford Street. 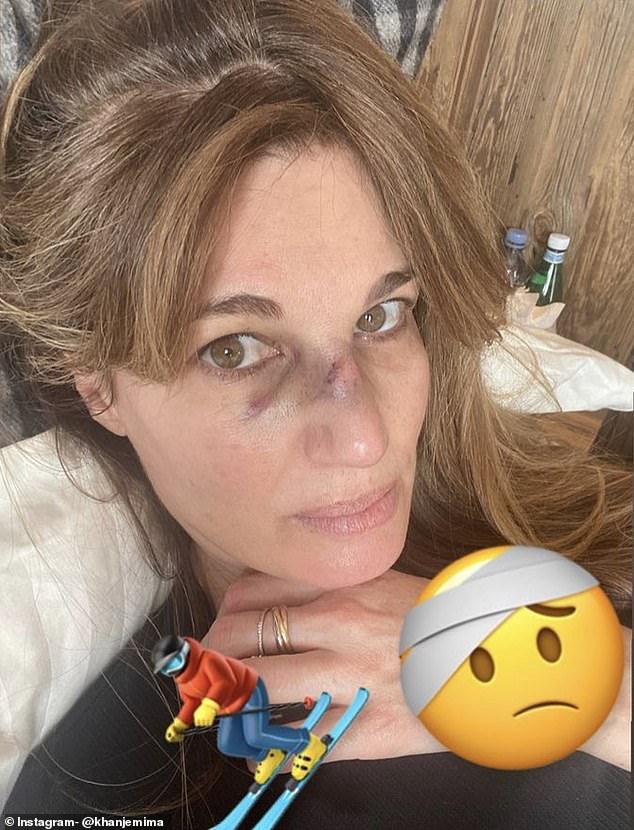 Screenwriter Jemima, 48, took a tumble while skiing which left her with a black eye and a bruised hooter

She’s negotiated her way through a few bumpy relationships, but Jemima Goldsmith clearly hit the slopes a lot harder than she would have liked.

Screenwriter Jemima, 48, took a tumble while skiing which left her with a black eye and a bruised hooter.

However, it did not stop the ex-wife of Imran Khan, who previously dated Hugh Grant, and Russell Brand, on Thursday night as I bumped into her at a birthday bash at Notting Hill’s Walmer Castle pub. 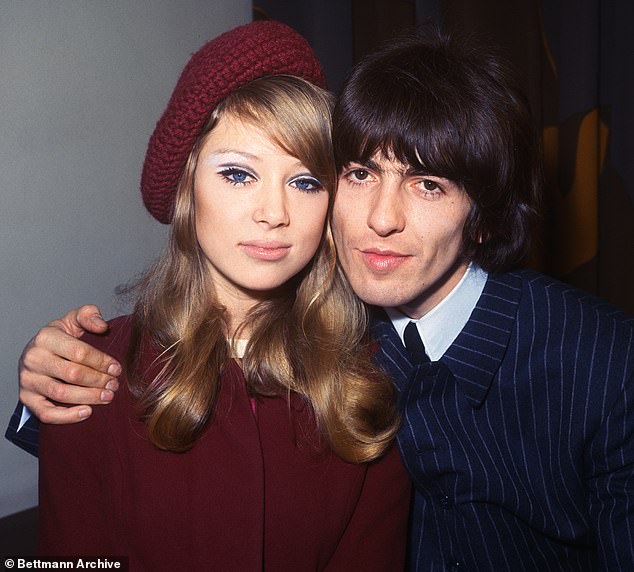 Pattie first met George in 1964 when she had a tiny role as a schoolgirl in the Beatles’ film debut, A Hard Day’s Night, in a scene filmed on a train

She eventually married Beatle George Harrison, but model Pattie Boyd recalls their relationship nearly didn’t happen as she flatly turned the mop-top down when he first asked her for a date.

Pattie first met George in 1964 when she had a tiny role as a schoolgirl in the Beatles’ film debut, A Hard Day’s Night, in a scene filmed on a train.

‘I had a one-day shoot. The train went down to Cornwall and back, so it took eight hours all together. And then at the end when we got near Waterloo station, George asked me if I’d go out with him that night. And I said no, I couldn’t, because I was seeing my boyfriend,’ she says.

‘And then I told my girlfriends and they said, “You’re completely mad! How could you turn him down?” And I said, “What I was thinking?”‘

The 36-year-old ‘Body Coach’, who came to prominence during lockdown for his online fitness classes, has just brought out a new collection of recipes.

And the father of two knows what he’d make for the monarch. 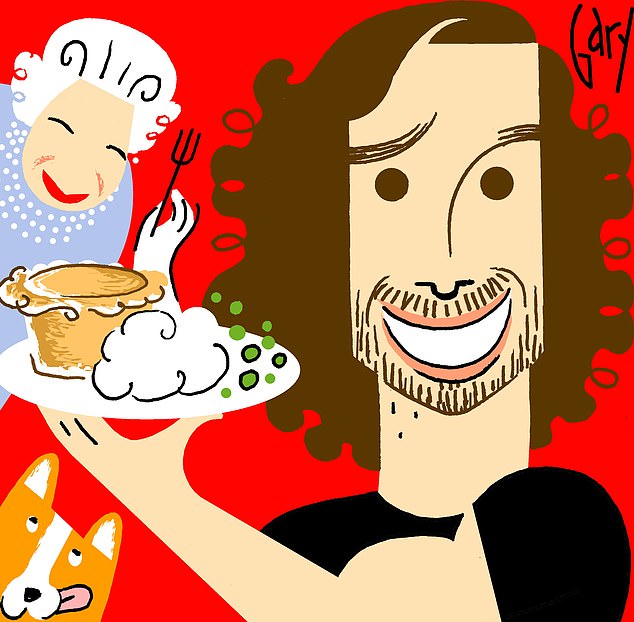 ‘I’d cook her my chicken, leek and cauliflower pie with filo pastry with a bit of mashed potato and peas,’ he tells me at the launch of Feel Good Food in West London. ‘I think she’d love it. I reckon she likes that sort of thing.’

Perhaps he can find out for himself when he picks up his MBE for charity work at Windsor Castle this month.

At 57, Joely is still very much Mummy’s girl 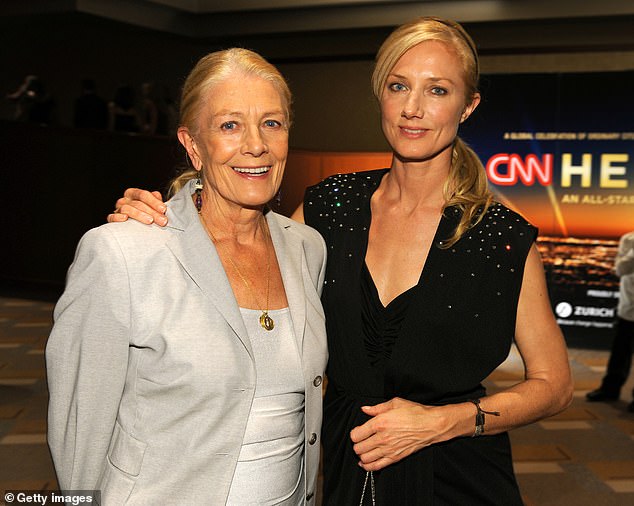 Joely Richardson struck a remarkable resemblance to her equally elegant mother Vanessa Redgrave at an event in London this week.

The actress, 57, wore a floor-length off-white gown cinched in at the waist with a ruffled collar and balloon sleeves to the V&A’s new exhibition, Fashioning Masculinities: The Art Of Menswear.

Pairing the feminine look with white leather boots and the trend for empowering ‘knuckle-duster’ rings, Richardson’s high cheekbones and warm smile mirrored Dame Vanessa, 85, who is still hard at work narrating Call The Midwife and is set to play Mrs Higgins in My Fair Lady at the Coliseum this summer. 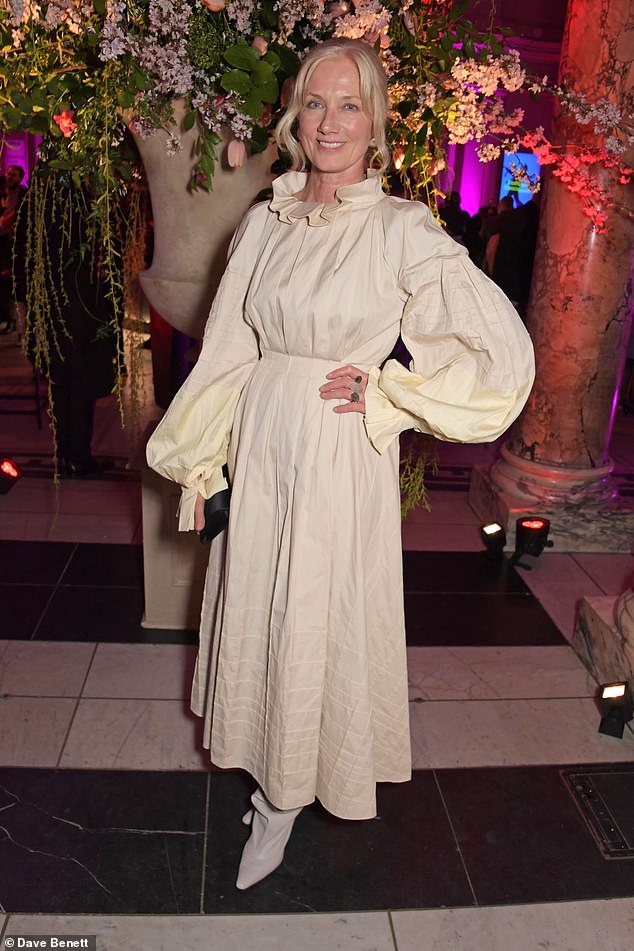 The actress, 57, wore a floor-length off-white gown cinched in at the waist with a ruffled collar and balloon sleeves to the V&A’s new exhibition

The smart set’s talking about…Which Hollywood A-listers will be at Imogen’s big day?

She is the daughter of the former president of the Historic Houses Association, who owns a castle in Herefordshire. He’s the property investor television personality who moves in Hollywood circles.

And now I can reveal Imogen Hervey-Bathurst and Sean Conlon are engaged. The pair have been together for four years, after a chance meeting outside a posh private members’ club.

Sean, 52, then invited Imogen, who is 17 years his junior, to Malibu for their first date, where he brought along his friends, three-times Oscar-nominated actress Michelle Pfeiffer and her husband, for moral support. 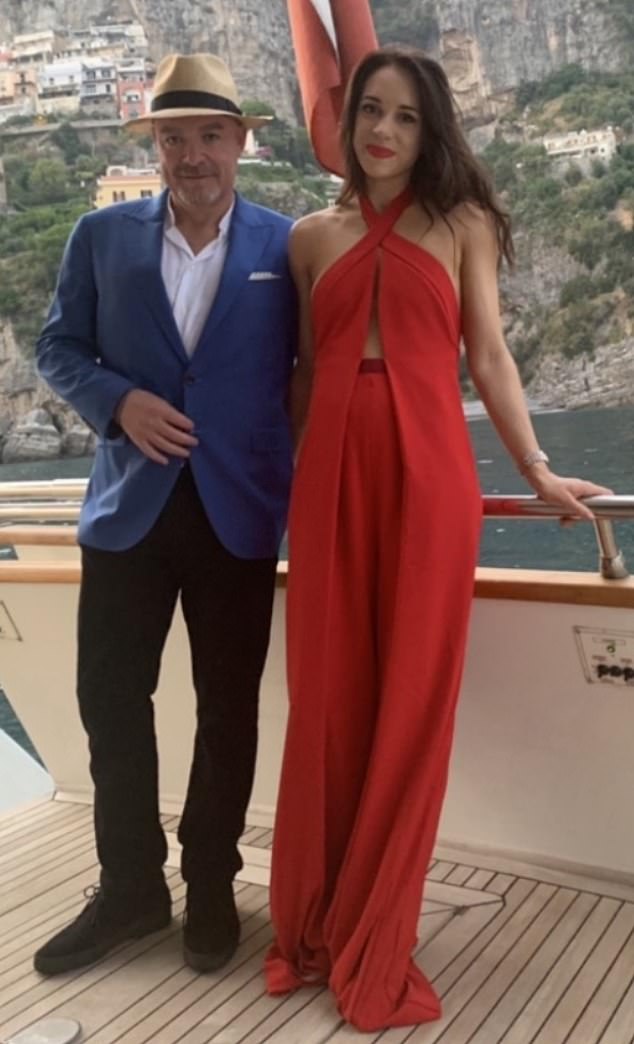 Sean Conlon and Imogen Hervey-Bathurst. have been together for four years, after a chance meeting outside a posh private members’ club

Conlon proposed in Venice and the couple will marry at Eastnor Castle, Imogen’s ancestral home at the foot of the Malvern hills, in September.

‘We are wonderfully happy and I think we make a great couple,’ Sean tells me.

Imogen, whose father is aristocrat James Hervey-Bathurst, co-founded a sustainable investment company in 2020.

‘I recently got asked to audition for a cougar — and I genuinely thought they wanted me to play the part of a big cat!’ says Downton Abbey star Raquel Cassidy, 54, who appears as the Countess of Grantham’s lady’s maid Phyllis Baxter in Julian Fellowes’s period drama. But she had no idea that the term can also refer to a woman of a certain vintage who favours significantly younger partners.

What would the Earl say?

Prince Charles and Camilla are seemingly seeking to boost their online presence by hiring a social media-savvy press secretary.

They want their PR to have ‘an innovative approach to social media’ and with a ‘knowledge of diversity issues and of the diversity of communities in the United Kingdom, in the Commonwealth and worldwide’.

Applicants can potentially earn from £70,000 a year, but are advised they ought to have worked in a high-profile press office before.

Perhaps a previous stint in the now defunct offices of Prince Harry and Meghan would be ideal?

Simon Mayo’s war of words with the BBC

DJ and author Simon Mayo relates how he got into a tussle with BBC bosses when he launched his popular Film Review podcast — which he recently announced would end on April 1 after 21 years.

Of becoming one of the pioneers of podcasting, the 63-year-old said: ‘Basically, we just had no idea what we were doing.

In fact, to start with, the BBC in their wisdom said you couldn’t call it a podcast — you had to call it a download.

Testino returns to past glories

Scandal-hit society snapper Mario Testino once captured the most iconic images of Princess Diana, but has now resorted to teaching classes online.

Testino, 67, became embroiled in a #MeToo scandal in 2018. He denied the claims but the Peruvian was dropped from Vogue and disappeared from public view.

He did attempt to stage a comeback at Milan Fashion Week last year, and has been snapped with the likes of Claudia Schiffer and Kate Moss in recent years. 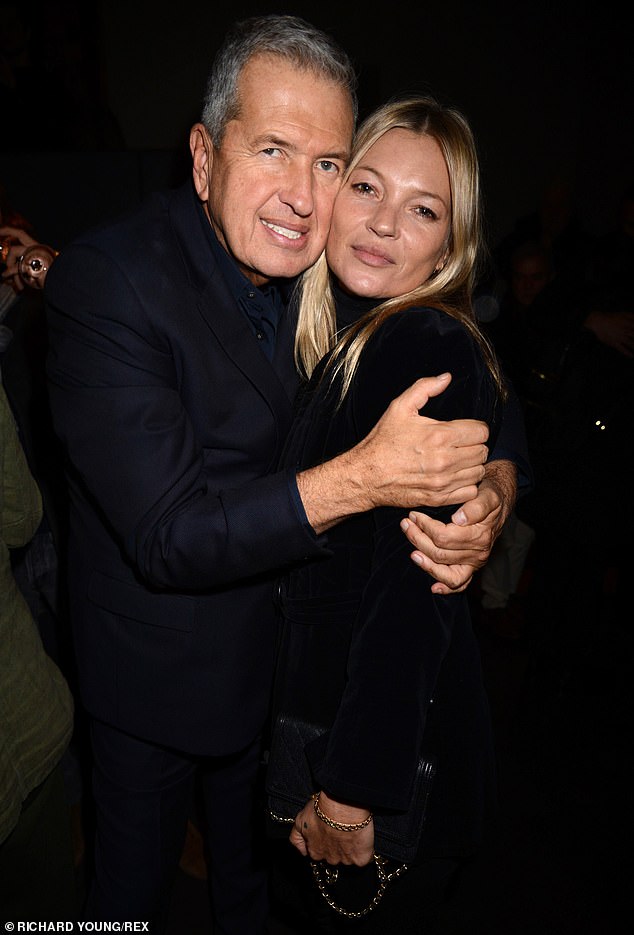 Testino, 67, did attempt to stage a comeback at Milan Fashion Week last year, and has been snapped with the likes of Claudia Schiffer and Kate Moss in recent years

The ‘Creating Images’ video lecture series, which costs £180, is billed as an ‘autobiographical journey’ in which Testino ‘shares his 40 years of experience’.