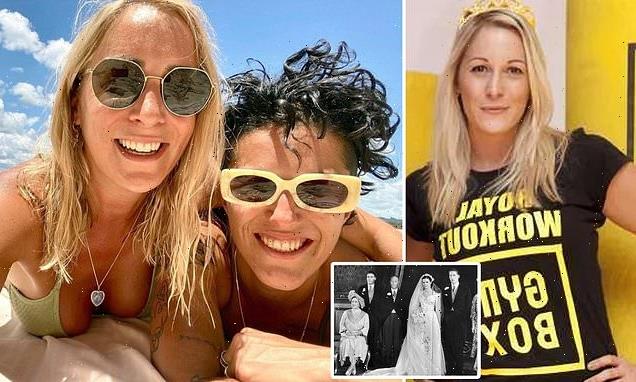 Her paternal grandparents, the Earl and Countess of Harewood, were treated to a wedding reception at St James’s Palace, attended by George VI and his wife, Queen Elizabeth.

But it seems safe to say vivacious blonde Ellen Lascelles will opt for something much less formal when she takes the marital plunge — with her Australian fiancee Channtel McPherson, known as ‘Chan’.

I can reveal that Ellen, 38, has been joyfully alerting friends about their engagement by posting the news online. 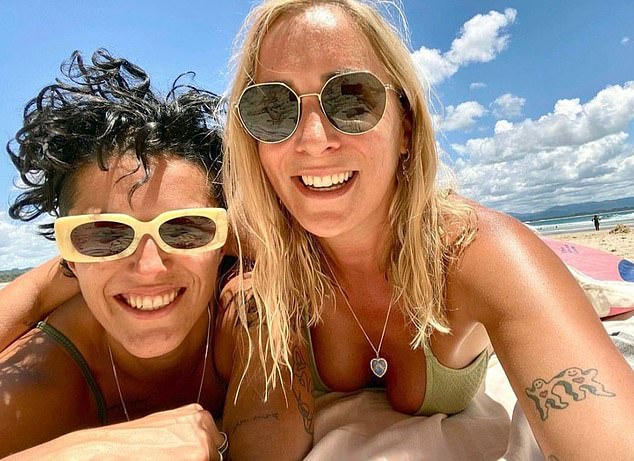 Ellen is entirely serious about Chan’s proposal, saying she is ‘floating on a love cloud’. To prove the point, she’s posted a snap of herself with Chan — previously manager of Bang-On T-Shirts — looking radiant as they enjoy beach time together

‘On New Year’s Day, Chan asked me to marry her, and turned what was an incredible 2022 into an even more incredible 2023,’ says Ellen.

She is the niece of David Lascelles, 8th and current Earl of Harewood, and elder daughter of David’s youngest brother, Jeremy Lascelles.

‘Two proposals in one day, plus a cat ring to seal the deal until we get a real engagement ring made,’ adds events manager Ellen.

A playful character, she has described herself as a ‘left-handed free spirit and full-time dreamer’ and, elsewhere, as a ‘sun-chasing vegan snack queen’.

She and her equally glamorous younger sister, Amy, once dolled themselves up in spoof tiaras and offered fitness classes which culminated in lifting a 10kg dumb-bell (‘the weight of an average royal corgi’) before Prince William and Kate Middleton’s wedding.

But Ellen is entirely serious about Chan’s proposal, saying she is ‘floating on a love cloud’. To prove the point, she’s posted a snap of herself with Chan — previously manager of Bang-On T-Shirts — looking radiant as they enjoy beach time together.

Theirs will not, of course, be the first same-sex marriage within the wider Royal Family. That milestone was notched up by Lord Ivar Mountbatten — great-nephew of Lord (‘Dickie’) Mountbatten. 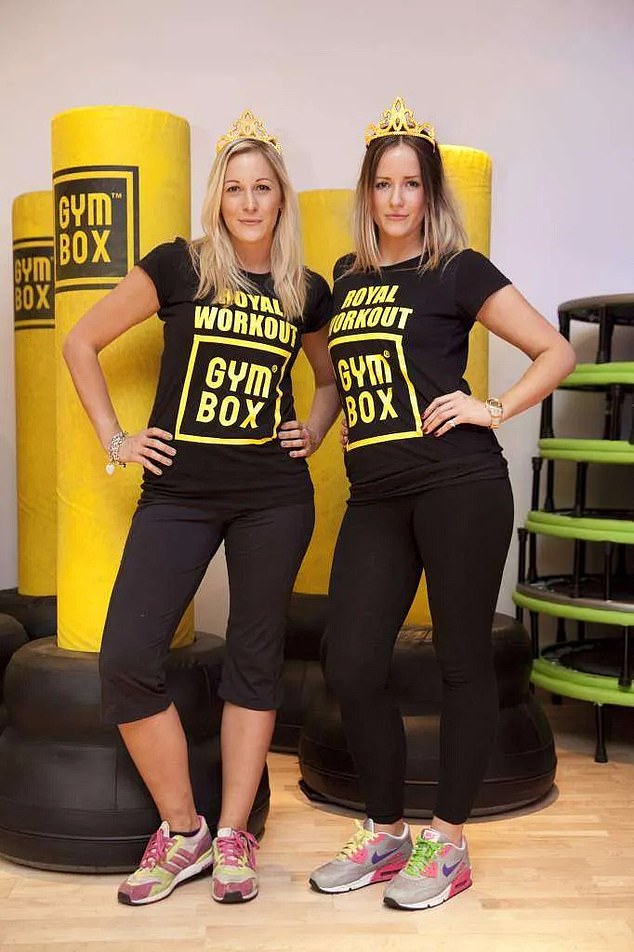 She and her equally glamorous younger sister, Amy, once dolled themselves up in spoof tiaras and offered fitness classes which culminated in lifting a 10kg dumb-bell (‘the weight of an average royal corgi’) before Prince William and Kate Middleton’s wedding

In 2018, seven years after divorcing Penny Thompson, with whom he has three daughters, Ivar married James Coyle, a Glaswegian airline cabin services director.

But Ellen, who lives in Australia, and Chan, the owner of a design company, will become the first all-woman marital pairing in the royal diaspora.

Like Ivar at the time of his divorce, Ellen also has young children — a six-year-old son and a daughter, four — with her Australian ex-boyfriend. But the couple never wed, and so her children will not join Ellen in distant line of succession to the throne, in which she occupies 74th place.

Her willingness to defy convention is far from unusual in the Lascelles family.

Her grandfather George caused his cousin, Queen Elizabeth II, great consternation by fathering a son out of wedlock. Even after his subsequent divorce, he was not welcome at court for several years.

His second son, James — Ellen’s uncle — has been even perkier, variously living in a hippy commune, performing at Glastonbury and marrying three times so far — most recently to Nigerian actress Joy Elias-Rilwan, the first black woman to marry into the wider Royal Family. 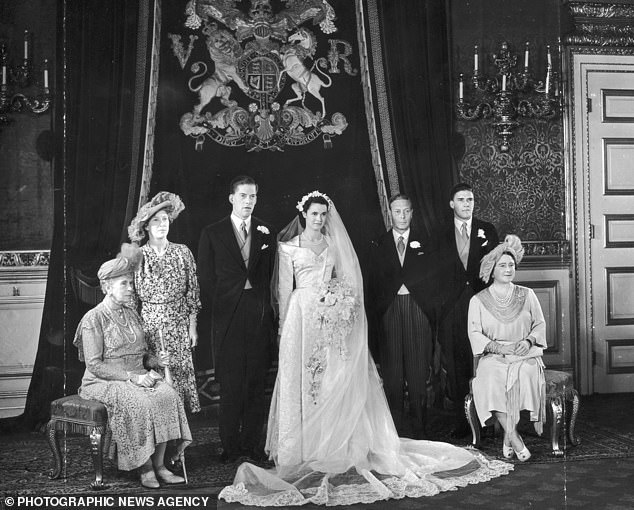 Her paternal grandparents, the Earl and Countess of Harewood, were treated to a wedding reception at St James’s Palace, attended by George VI and his wife, Queen Elizabeth

Government minister Zac Goldsmith, whose sister Jemima was a friend of Princess Diana, has little sympathy for Prince Harry. Paraphrasing King Charles’s younger son in his new memoir online, Lord Goldsmith says: ‘William took the better bedroom at Balmoral, the bigger one with a view. My half was smaller and less luxurious.’ He jokes: ‘Is there no end to the deprivation?’

Joan Bakewell is optimistic as she reveals cancer battle

Baroness Bakewell, who has spoken movingly of how powerless she felt when her sister was dying from breast cancer aged 58, has revealed that she’s now fighting her own health battle.

The distinguished broadcaster, 89, tells me she’s undergoing treatment for colon cancer. ‘I had an operation before Christmas,’ she says. ‘I’m feeling fine, and the chemotherapy is a mopping-up operation to make sure it doesn’t come back.’

Lady Bakewell, whose cancer was detected during a routine examination, adds: ‘I’ve always been optimistic because I caught this cancer early on. Within a week, I was in hospital having an operation.’ She’s continued working, including on a new series of Landscape Artist Of The Year, on Sky Arts tonight: ‘One session of voiceover — that’s all I needed to cancel.’

Lady Bakewell, who was dubbed the ‘thinking man’s crumpet’, inspired Harold Pinter’s Betrayal after she had an affair with the playwright when she was married to TV producer Michael Bakewell. Pinter was married to actress Vivien Merchant.

Her work as patron of Breast Cancer Care has stood her in good stead: ‘Treatments have improved so much, and cancer is no longer a death sentence. In a sense, it’s made me optimistic, which sounds odd.’

A dig at Harry and Meghan’s Netflix ‘docu-series’ comes from pukka former Tory MP Hugo Swire. Speaking in the House of Lords, the newly ennobled Swire spoke of the ‘recent, not uncontroversial Netflix documentary in which one of the contributors labelled the Commonwealth “Empire 2.0”’. This was, says Swire, ‘either deliberate mischief-making or astonishing ignorance’. Harry and Meghan guilty of mischief-making or dimness? Not possible!

Criticised for becoming an ambassador for World Cup host Qatar, where homosexuality is illegal, David Beckham is crying all the way to the bank. I can reveal that the former England captain made a staggering £454,000 a week last year. Accounts for his business, Beckham Brand Holdings Ltd, published this week, disclose that it made a pre-tax profit of £23.6 million on income of £42.2 million in 2021.

His ‘portfolio’ of contracts is reported in the business review as including: ‘Electronic Arts, Adidas, Tudor, Diageo’s Haig Club and Maserati.’