Emilia Clarke, 33, certainly commanded attention as the star of Last Christmas at the BFI Southbank tonight. The Game of Thrones actress braved the chilly weather in the capital by posing on the red carpet in a short sleeved dress, which boasted a plunging neckline down to her naval.

Despite the cold conditions, Emilia couldn’t have looked happier as she beamed away to the photographers.

Her frock showed off her incredible figure, and fell down just above her ankles.

The top-half of her dress would have caught the attention of onlookers, thanks to the dazzling jewels embedded down the neckline.

The extreme cut-out enabled Emilia to flash a little more flesh, as she posed up a storm. 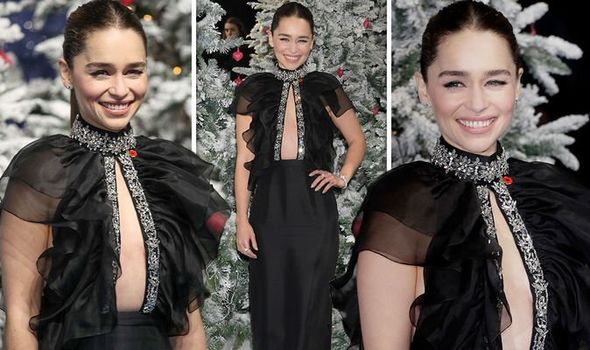 Emilia teamed the stunning ensemble with a pair of strappy black high-heels, to elongate her petite frame.

The Daenerys Targaryen star pulled her brunette locks into a ponytail and her make-up consisted of blush pink cheeks and a matching lipgloss.

Emilia also posed with her co-star and love interest in the film, Henry Golding, who looked very dapper, and warm, in a roll-neck top underneath a velvet jacket.

The actress plays Kate in the movie, who has been continuously unlucky, and ends up meeting Tom (played by Henry) when she works in a Christmas shop, dressed as an elf.

Meanwhile, Emilia appeared on This Morning today and chatted to hosts Holly Willoughby and Phillip Schofield about her time on Game of Thrones.

She admitted it still feels “really strange” not having the show in her life anymore.

Emilia joked: “I was hanging out with some friends from the cast the other day and we were all there like: ‘Still weird? Yeah? still weird!’”

The presenters then went on to discuss the backlash the series received after the final season was aired.

Emilia was quick to explain her side of the argument, saying: “I know – this is the thing!

“On every level, it’s just profoundly flattering that people genuinely cared that much, that they were with us that long, and that they really truly believed in it.”

Addressing the backlash itself, she added: “I don’t read anything online, really, because it doesn’t help my brain.

“But, largely speaking, I think people are being very kind about Daenerys, and the Mother of Dragons, and kind of backing me up – and that’s lovely!”

“But I don’t think there is an ending that anyone could have written that, no matter how many signatures were on any bit of paper… you just can’t! And that’s really just so flattering.”

Emilia was referencing a petition made online called: “Remake Game Of Thrones Season 8 with competent writers.”

This Morning airs weekdays on ITV from 10.30am.