VERDICT: Girls and boys come out to play

Ever since Emma Corrin catapulted to stardom, after peeping shyly through their fringe as a teenage Princess Diana in The Crown and switching pronouns from she to they, the androgynous beauty has been the pin-up for non-binary identity.

Who better, then, to play the title role in Neil Bartlett’s funny but moving adaptation of Orlando, Virginia Woolf’s gender-bending, time-travelling flight of fancy?

It’s a frisky romp through the centuries, with Orlando – first as a man, then as a woman – exploring sex, sexuality, sexism as well as ecstasy: where to find it, and with whom.

Orlando, penned in 1928 and inspired by Woolf’s passionate affair with the aristocrat Vita Sackville-West when they were part of the boho Bloomsbury set but also married women, was a ground-breaking bid for self-determination. 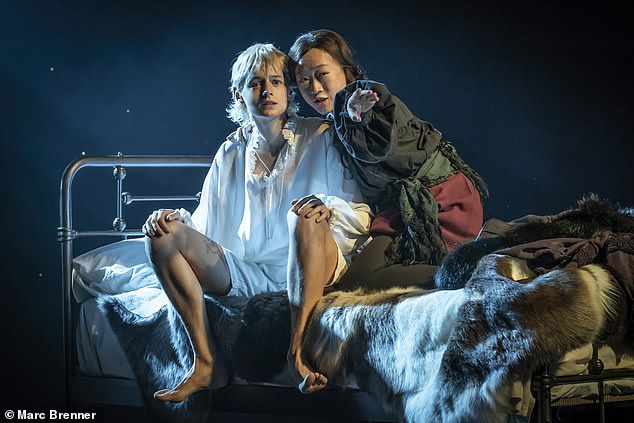 It’s a frisky romp through the centuries, with Orlando – first as a man, then as a woman – exploring sex, sexuality, sexism as well as ecstasy

And it remains so, wittily engaging with today’s often shrill debate about gender fluidity, rigid classifications and conventional expectations.

Bartlett’s approach is playful rather than pious, merrily dropping in lines from Shakespeare (an expert on the business of male actors playing female characters and cross-dressing as the part demands) and cheeky asides about whether the monarch prefers ‘Arthur or Martha’.

Orlando bursts on, tousle-haired and trouser-less, complete with (fake) wedding tackle, pulling doublet and hose over long, slender, downy legs and asking: ‘Who am I?’

A captivating Corrin – a timeless, ageless pixie with a shock of white hair – inhabits the role to perfection, combining the dash and dazzle of a kingfisher with the casual sense of entitlement of an aristo.

But when he is dumped by Millicent Wong’s amusingly feral Russian Princess, it is his turn to get hurt.

Halfway through, Orlando wakes up as a Victorian woman and off comes Corrin’s top to prove it.

The 26-year-old dons a corset but remains the same buoyant, beguiling personality, in order to experience life as an ‘obedient, chaste and scented’ female. 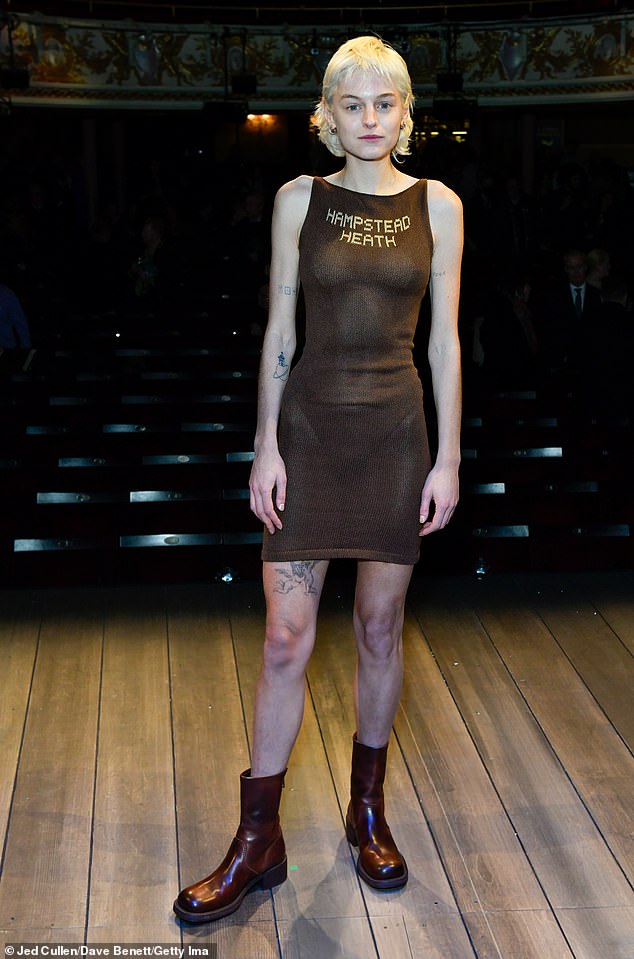 A captivating Corrin – a timeless, ageless pixie with a shock of white hair – inhabits the role to perfection

Bartlett has deftly expanded the role of Orlando’s housekeeper, Mrs Grimsditch, (hilariously earthy, mumsy Deborah Findlay) to that of a cockney wardrobe-mistress.

Chatting to the audience (‘boys and girls and, er, everyone,’ she says, covering all possibilities) while helping her mercurial master (and then, mistress) into dozens of costumes, she guides us through Orlando’s giddying adventures.

Less successful is the chorus of nine donnish, bespectacled Virginias of all ages, in long skirts and cardies, appearing at intervals.

While they remind us of the reality behind the fantasy, Woolf’s voice remains a blur.

The design disappoints too, evoking none of Woolf’s glorious descriptions of landscapes.

As a hymn to beauty, Michael Grand-age’s production (Corrin aside) misses the mark.

As a joyous ode to freedom, though, he nails it.