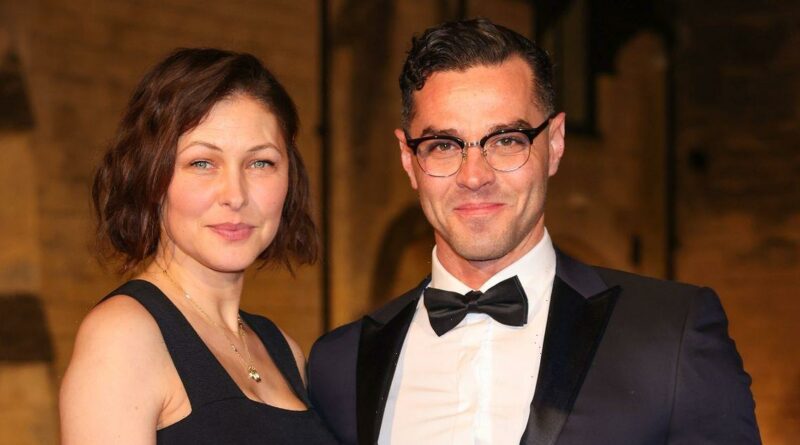 Emma Willis has been spotted looking stunning as she posed with husband Matt on the red carpet of the Jaguar Land Rover Christmas Party.

The 45 year old, who recently enjoyed a rare date night out at the theatre with her other half, put on a stylish display in a floor-length gown with cut-out details by her ribs for the event at Ellenborough Park on Tuesday 14 December.

TV presenter Emma styled her brunette bob down into loose waves and kept the make up to a minimum, simply wearing a touch of eyeliner and mascara alongside a hint of pink blush.

Accessorising with a gold chain necklace and several rings, the star could be seen teasing a small smile as she wrapped an arm around her musician husband Matt.

Matt, who previously claimed the Church of Scientology tried to break up his marriage, looked dapper in a black tuxedo as he donned a crisp white shirt with a black blazer, trousers and shoes alongside a bow tie.

Teaming the ensemble with a pair of black-rimmed glasses, the Buster star couldn't help but smile as he posed with one hand in his pocket and the other around his wife's waist.

Earlier this year Matt spoke exclusively to OK! about his marriage to Emma as he said the key to their relationship has been to "embrace" who they are.

"But I had a very good guide in Emma. She’s a little bit older than me, so she’d been there and done that, and she was exactly the influence I needed at that time in my life."

He continued: "We appreciate each other, we know ourselves well and I love her to pieces. She just gets me; she understands who I am and she’s never tried to change me.

"I don’t try to change her either – we are who we are and we embrace that about each other."

The couple, who are parents to Isabelle, 12, Ace, 10, and Trixie, five, also celebrated their 13th wedding anniversary this year.

Speaking on what they did for the special day, he shared: "I was filming in Suffolk and she was covering on The One Show. So she jumped in a car after she finished and drove up to see me.

"We met in Ipswich and had a night in a hotel, which was so nice. We would never do that usually. We made a big deal of our 10-year anniversary with a vow renewal party but normally we just do cards and a little present."

Stay up to date with all the latest on Emma and Matt Willis by signing up to OK!'s daily celebrity newsletter.