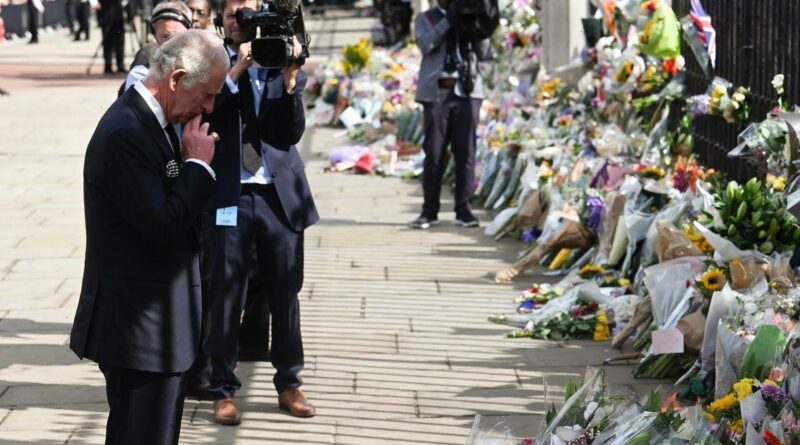 King Charles III and Queen Consort Camilla landed back in London and made their way directly to Buckingham Palace today, where they were met with huge floral tributes left by the mourning public.

Upon becoming the new monarch following the death of Her Majesty Queen Elizabeth II, Charles, 73, and Camilla, 75, arrived to huge crowds gathered to pay their respects.

After shaking hands with many in front of the gates, the Royal couple walked around to observe some of the floral displays.

Charles, who was dressed in a black suit with a matching tie, was seen looking emotional over the overwhelming number of people and the moving gestures they made.

The pair moved slowly, taking in all the arrangements and notes on display around.

Charles was then seen asking one of the security guards: "Do we go back?" as he couldn't find the correct entrance they were meant to go through.

Camilla, who donned a black dress, and Charles then swiftly turned around and retraced their steps before walking through the main gates – starting their future as the King and Queen of England.

King Charles III is expected to address the nation on television this evening, and hold his first audience with Prime Minister Liz Truss – who was appointed by the Queen two days before her death.

Charles will be proclaimed King at the Accession Council at 10am on Saturday in the State Apartments of St James’s Palace.

Buckingham Palace said: “His Majesty The King will be proclaimed at the Accession Council at 10.00hrs tomorrow morning 10th September in the State Apartments of St James’s Palace, London.

“The Accession Council, attended by Privy Councillors, is divided into two parts. In Part I, the Privy Council, without The King present, will proclaim the Sovereign, and formally approve various consequential Orders, including the arrangements for the Proclamation.

“Part II, is the holding by The King of His Majesty’s first Privy Council. The King will make his Declaration and read and sign an oath to uphold the security of the Church in Scotland and approve Orders in Council which facilitate continuity of government.

“The Accession Council will be followed by the Principal Proclamation, which will be read at 11.00hrs from the balcony overlooking Friary Court at St James’s Palace. The Proclamation will be read by Garter King of Arms, accompanied by the Earl Marshal, other Officers of Arms and the Serjeants at Arms. This is the first public reading of the Proclamation.”

Shortly after the news of Her Majesty's death, Charles shared a sombre statement expressing his grief as he wrote: "The death of my beloved Mother, Her Majesty The Queen, is a moment of the greatest sadness for me and all members of my family.

"We mourn profoundly the passing of a cherished Sovereign and a much-loved Mother.

"I know her loss will be deeply felt throughout the country, the Realms and the Commonwealth, and by countless people around the world.”

"During this period of mourning and change, my family and I will be comforted and sustained by our knowledge of the respect and deep affection in which The Queen was so widely held," he added in a statement posted on Twitter under the handle Clarence House.

The date of the Queen's funeral is yet to be announced, but it is expected to take place 10 days after her death – giving time for the public to pay their respects as she lies in wait.

While the public will have 10 days to mourn the former monarch, Charles declared that the Royal Family will observe a further seven days, bringing the total up 17.

The Royal Mourning will be observed by members of the family, royal household staff and representatives of the royal household on official duties, alongside troops committed to ceremonial duties.

Union flags were lowered to half mast upon the news of the Queen's death and thousands gathered around Buckingham Palace and Windsor Castle to express their sorrow.

Gun salutes and Church bells have rung out throughout the day, celebrating Her Majesty's life and 70-year reign.