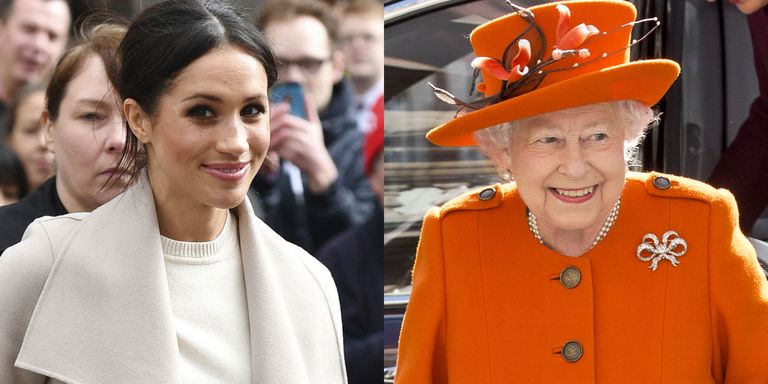 Prince Harry and Meghan Markle are in wedding-planning mode, getting ready for tomorrow’s nuptials at St. George’s Chapel in Windsor Castle. But before that, Meghan has to get into full royal mode. Perhaps most importantly of all, Meghan must get in good with the Queen, her future grandmother-in-law and, oh yeah, head of the royal family.

Luckily, all sources seem to agree that the future duchess and the current monarch get along swimmingly. And Meghan got the coveted endorsement of Her Majesty’s corgis, too. Here’s what you need to know about the Queen’s relationship with Meghan Markle.

They met before Meghan and Harry got engaged.

Us Weekly reported that Meghan first met the Queen in September 2017 at Balmoral Castle, and things apparently “went well,” leaving Harry pleased about how his girlfriend got along with his loved ones. And it turns out that was the first of several meetings.

In the couple’s big post-engagement interview, Meghan said she had met the Queen “a couple of times” and Harry had prepared her for what the meeting would be like. “It’s incredible. I think to be able to meet her through his lens, not just with his honor and respect for her as the monarch but the love that he has for her as his grandmother, all of those layers have been so important for me.” She added, “When I met her I had such a deep understanding and, of course, incredible respect for being able to have that time with her, and she’s an incredible woman.”

The Queen’s corgis love her.

Also in the post-engagement interview, Prince Harry noted that the Queen’s beloved corgis have never liked him—but they love his fiancée. “The corgis took to you straight away. For the last 33 years, I’ve been barked at, and this one walks in, absolutely nothing, just wagging tails,” Harry joked. “Just laying on my feet during tea, it was very sweet,” Meghan said. And it makes sense, because Meghan is an animal lover, who had two rescue dogs of her own at one point. (She reportedly had to leave one behind when she moved to London to live with Harry.)

Their first appearance together was at an important event.

On March 12, the two made their first appearance together—along with other senior members of the royal family—at a service at Westminster Abbey celebrating Commonwealth Day. Harry and Meghan were seated directly behind the Queen and Prince Charles for the ceremony, which featured a performance by Liam Payne and celebrated the Commonwealth, which makes up 53 countries around the world and is headed by the Queen.

She gave Meghan the ultimate blessing, and no, there was no shade.

In March, the Queen gave her official approval for Meghan and Harry to get married: “My Lords, I declare My Consent to a Contract of Matrimony between My Most Dearly Beloved Grandson Prince Henry Charles Albert David of Wales and Rachel Meghan Markle, which Consent I am causing to be signified under the Great Seal and to be entered in the Books of the Privy Council.”

Some people suggested that this was less enthusiastic than the Queen’s announcement about Kate Middleton, in which she called her “trusty and well-beloved.” But that was in a separate document, and the announcements for both princes were actually extremely similar.

Vanity Fair reported that Meghan has been meeting with the monarch to talk about the particulars of planning a royal wedding, including flower arrangements. “She is very hands-on with everything,” a source told the magazine of Markle. “She met with the Queen who wanted to talk through some ideas for flowers and introduced her to some of her events staff. Meghan is taking everything on board, but she has her own ideas when it comes to flowers.”

Yesterday, the palace officially announced Phillippa Craddock as the official florist for the royal wedding. It looks like Markle and the Queen have great taste.

Meghan’s dog got to ride in a car with the Queen.

You know your future grandmother-in-law likes you when your dog gets the best seat in the house. Markle’s beagle, Guy, was seen riding in a car with the Queen as the two made their way to Windsor for the royal wedding. Markle hasn’t even been seen spending time one-on-one with the monarch, but Guy, a rescue pup from the United States, got that honor.

Want more royals? Now you can watch all of the best episodes from Bazaar’s Royal Watch—right here on Prime Video.