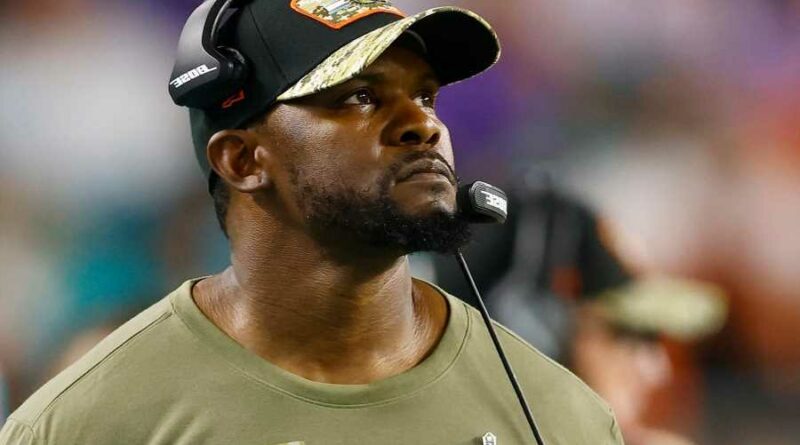 The lawsuit, filed Tuesday in Manhattan federal court, alleges that the NFL “remains rife with racism, particularly when it comes to the hiring and retention of Black Head Coaches, Coordinators and General Managers.”

Flores, a longtime assistant with the New England Patriots under Bill Belichick who is widely considered to be one of the league’s brightest young coaches, was fired in January after his third season as head coach of the Dolphins. Flores finished with a 25-24 record and the Dolphins went 9-8 each of the past two seasons, but it could be argued they overachieved both years, given their roster. Several coaching vacancies have been filled throughout January, but Flores is still without a job.

“In certain critical ways, the NFL is racially segregated and is managed much like a plantation,” the lawsuit continued. “Its 32 owners— none of whom are Black — profit substantially from the labor of NFL players, 70% of whom are Black. The owners watch the games from atop NFL stadiums in their luxury boxes, while their majority-Black workforce put their bodies on the line every Sunday, taking vicious hits and suffering debilitating injuries to their bodies and their brains while the NFL and its owners reap billions of dollars.”

Pittsburgh Steelers Head Coach Mike Tomlin is the only current Black head coach in the NFL.

The NFL implemented the Rooney Rule in 2003 to combat a lack of diversity in its coaching ranks, requiring teams to interview at least one minority candidate. Flores, however, argues that the rule is “not working” and that teams are “not doing the interviews in good-faith.”

Flores is suing the New York Giants, Denver Broncos, the Miami Dolphins, and 29 other “John Doe” teams, along with the NFL. He cites the hiring process with the Giants and Broncos and his firing by the Dolphins, which surprised many of the league’s observers. The complaint even includes screenshots of awkward text messages Flores exchanged with his former head coach Bill Belichick in which Belichick congratulates Flores on getting the Giants job, only to later realize he thought he was texting with Brian Daboll, who was recently announced as the Giants’ next head coach.

“Sorry — I fucked up,” Belichick wrote. “I double checked & I misread the text. I think they are naming Daboll. I’m sorry about that.”

Flores says he was forced to sit through a sham dinner the Giants’ general manager knowing they had already tapped Daboll to be their next head coach.

“We are pleased and confident with the process that resulted in the hiring of Brian Daboll,” the Giants said in a statement released Tuesday afternoon, according to ESPN. “We interviewed an impressive and diverse group of candidates. The fact of the matter is, Brian Flores was in the conversation to be our head coach until the eleventh hour. Ultimately, we hired the individual we felt was most qualified to be our next head coach.”

Flores isn’t buying it. “God has gifted me with a special talent to coach the game of football, but the need for change is bigger than my personal goals,” he said in a statement released by his attorneys on Tuesday. “In making the decision to file the class action complaint today, I understand that I may be risking coaching the game that I love and that has done so much for my family and me. My sincere hope is that by standing up against systemic racism in the NFL, others will join me to ensure that positive change is made for generations to come.”