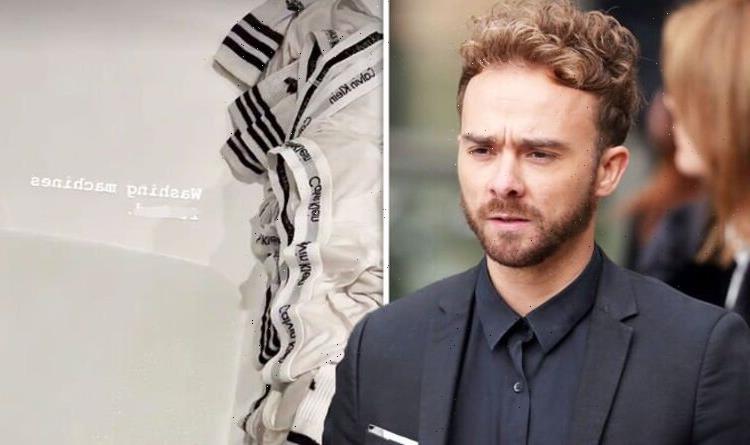 Coronation Street star Jack P Shepherd, who plays David Platt on the ITV soap, took to his Instagram story to tell his 385,000 followers that he was forced to find an alternative after a sudden malfunction. The actor cheekily addressed his complaint as he shared a picture of his issue today.

Taking to the picture-sharing site, the 34-year-old shared a candid snap of his underwear soaked through while hanging on the side of the bathtub.

The tub had been filled with water as the actor addressed his home dilemma.

He explained that his washing machine had broken down and he was forced to wash his clothes in the bath.

The actor captioned the post: “Washing machine is f****d.”

The Corrie veteran often shares updates of his home life on social media with his legion of followers.

Jack recently returned from a romantic weekend in London with his girlfriend Hanni Trewek.

The loved-up couple spent time being tourists, seeing the sights, having cocktails at the Ritz and going to the Natural History Museum.

Jack and Hanni – who worked behind the scenes on the ITV soap – have been together for three years.

Meanwhile, the soap star was forced to take a break from filming at the start of the year after catching Covid.

Speaking about his experience on the Sofa Cinema Club podcast he opened up on his health.

Jack explained: “I have the vid, it caught me.

“I don’t have any symptoms. Nothing. I was in the shower Monday morning and I can’t smell the shampoo and I go, ‘This is weird.’

“Shower gel – nothing. It’s an FCUK box set, Hanni’s mum got me it for Christmas.

Jack concluded: “I just ring up work and go, ‘I can’t smell or taste.’

The on-screen star first spotted the signs while he took a shower.

Jack had to stay home from work, but thankfully he has now recovered.