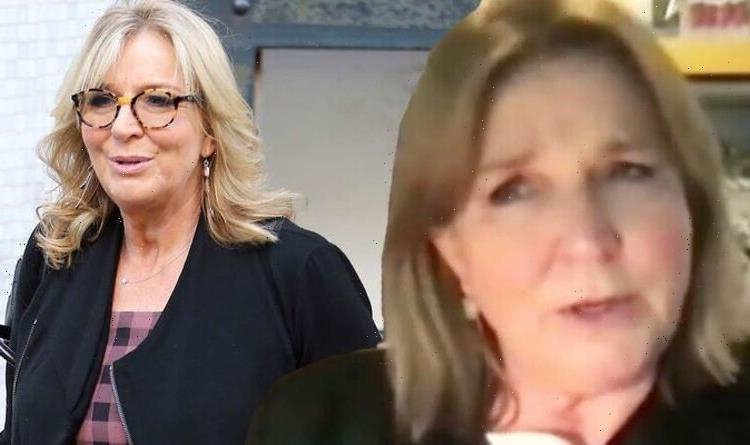 Fern Britton, 64, has revisited her time on BBC’s Strictly Come Dancing back in 2012 during Kate Thornton’s White Wine Question Time podcast last week. The former This Morning host reflected on her “affiliation” with the crew and band members during the live tour, who she said were “so good at everything”.

She recalled seeing Fern spending more time with the crew than the dancers.

Kate began: “You and I toured together on the Strictly Come Dancing tour and one of my first observations of you was that you just wanted to hang with the crew.

“You know, you weren’t hanging out with the cast so much as you just had a natural affiliation with what everybody’s jobs were backstage and how they were getting done.

“And in the end you even started travelling on some of the production buses rather than the dancers’ buses.”

Fern burst out laughing as she agreed: “I did. Yes, I did!

“I was very much a part of the tribe with the crew and the band – and they were so much fun!

“I mean, gosh, we did this big Strictly tour, it was hilarious, Kate, and I loved it.”

“You were missing your son and there were all sorts of things, weren’t there?

“It’s an emotional thing to go off on tour and think that you’re a rockstar.

“We were treated like rockstars, weren’t we? Absolutely wonderful.”

Fern then recounted how she first started spending time with the band during the tour.

She said: “The first night, I got onto the band bus, I said, ‘excuse me, can I get on with you lot.’

“And they went, ‘haha well, it’s only taken you five days but you’re on our bus.’

“And they’re so very good at everything. There was somebody carving a handmade artisan sourdough and someone was producing some homemade cheese and a nice little chutney and a bottle of Malbec.

“It was different to the dancers, who were just funny, hilarious but I just felt better on the band bus.”

Fern previously spoke to BBC presenter Carol Kirkwood for Fane.co.uk about her Strictly experience as she gushed about the “amazing” tour.

In quotes obtained by The Sun, she said: “The tour is amazing.

“How often does a 55-year-old woman get to dance the Viennese Waltz at the O2 in front of 20,000 people, in a fabulous dress with a handsome man?”