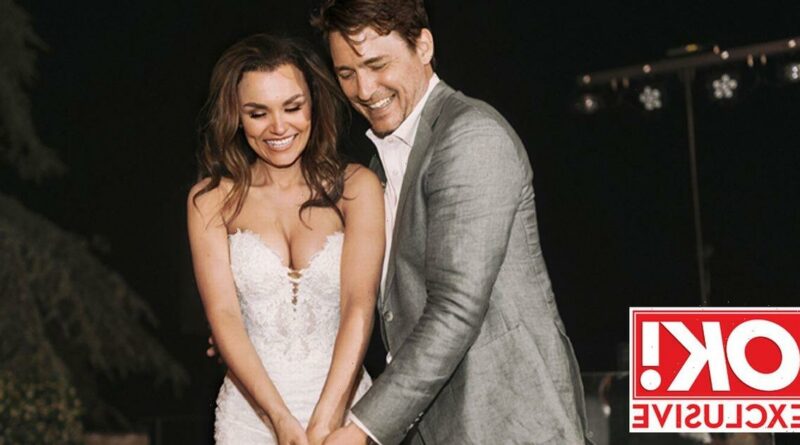 Samantha Barks married Alex Stoll in a beautiful Tuscan ceremony, surrounded by 50 of her closest friends and family.

Her special day featured lots of personalised touches, while she opted to swap a conventional tiered wedding cake for an Italian tradition of a 10 minute cake show.

The Frozen: The Musical star, who plays Queen Elsa in the production, and her new husband gathered with their 50 guests to watch the display. Chefs crafted the cake in just 10 minutes, while the newlyweds cut the masterpiece to the sound of Diamonds by Rihanna as guests waved sparklers in celebration.

The fantastic entertainment followed a fabulous four-course meal, set in the stunning venue of Capannelle Wine Resort in Chianti.

The dinner started off with tomato flan, followed by truffle risotto and beef with potatoes, while dessert was a palate-cleansing lemon sorbet washed down with a glass of prosecco.

Later on, while the party carried on until to the early hours, guests could make use of the gelato stand set up at a convenient stone's throw away from the dancefloor.

After the cake show, Samantha and Alex's first dance was to anthem Shallow, by Lady Gaga and Bradley Cooper from the flick A Star Is Born – a song that had a special meaning to the newlyweds.

“I love the song and the film, but we have a very funny story of doing karaoke [to it]," she told us.

“As a singer, I don’t normally do karaoke. We were in a restaurant and it was a little tiny room and no one was there. They say dance like no one’s watching, well we were singing like no one’s listening. We were properly going for it and we turned around and 200 people swarmed.”

Alex added: “At that moment, the sky opened up and it was pouring down. It was thundering and lightning. It was also a song we listened to a lot when we first started dating.”

Other custom touches on the day include the special cocktails – a Manhattan, which was a nod to Alex's American roots – and the Celtic Comfort, which was a mix of Irn Bru and Southern Comfort, a favourite of Samantha's family from the Isle of Man.