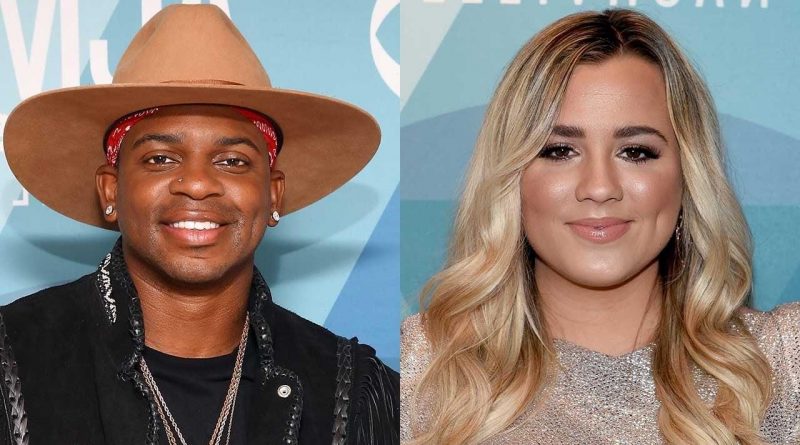 Gabby Barrett and Jimmie Allen are already big winners at the 2021 Academy of Country Music Awards… and the ceremony hasn’t even happened yet!

Ahead of Sunday’s ceremony, Keith Urban — who’s splitting hosting duties with Mickey Guyton — recorded a personalized video card for both Barrett and Allen to tell them that they’re the 2021 New Artists of the Year.

Barrett was initially confused when she received what Urban called “mighty fine news,” but expressed delight with screams and giggles as she took it all in.

“This is such an honor,” she continued. “Ever since I came into the country music community, everybody’s been absolutely wonderful to me. So thank you so much. It’s more than I deserve… this made the whole year for me.”

Last year, Barrett was nominated for the same award. At the time, she told ET that a win “would mean a ton.”

“As an artist… when I was younger, I really wanted to be able to get up on the stage, and give my speech, and have people enjoy my music, and all of those things,” she said at the time. “… I think it definitely opens more doors for you, a hundred percent. It turns people’s heads that weren’t really turned before.”

Like Barrett, Allen didn’t know what was going on at first, as Urban told him via video, “I hope you’re feeling good. You’re about to feel a whole lot better.”

Allen reacted to the exciting news by throwing the card and jumping out of his seat. “Stop playing!” he exclaimed, before deciding to watch the video for a second time just to be sure he heard it correctly.

“Wow,” Allen said, before quipping, “Do I give my acceptance speech now?”

The wins give both Barrett and Allen their first ACM award. Barrett is also up for Single of the Year for her song, “I Hope.” They are both set to perform during Sunday’s show.

“We are thrilled to present Jimmie Allen and Gabby Barrett with their first ACM Award wins,” Damon Whiteside, CEO of the Academy of Country Music, said in a statement. “Jimmie and Gabby have experienced tremendous success at both Country Radio and streaming already, and we are proud to recognize them for such an extraordinary start to their careers.”

“A huge congratulations to each of them for this well-deserved win, and to all of our nominees for being recognized for their incredible contributions to Country Music,” he continued. “We look forward to welcoming Jimmie and Gabby to the ACM Awards stage on April 18.”

Tune in to Entertainment Tonight on Friday, April 16 to see Barrett and Allen co-host the show. The 2021 Academy of Country Music Awards will air from Nashville, Tennessee, on Sunday, April 18 at 8 p.m. ET on CBS.