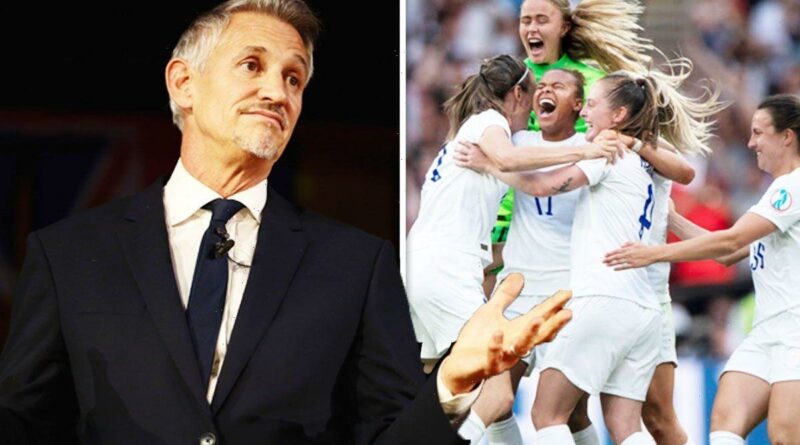 Former England captain Gary Lineker took to Twitter and heaped praise on the England Lionesses’ stunning victory at Wembley in the Women’s UEFA Euro 2022 final on Sunday. The Lionesses made history by becoming the first England team to ever win the European Championships.

It was also the country’s first major footballing success since they won the World Cup, against the same opposition, in 1966.

Taking to Twitter today, the 61-year-old relayed a well-known quote he had previously shared at the World Cup three decades ago but reworded the famous line in honour of the Lionesses in 2022.

Gary wrote: “Football is a simple game. 22 women chase a ball for 90 minutes and, at the end, England actually win. Congratulations @lionesses. Fabulous.”

But many social media users took issue with the remark, calling out the Match of the Day presenter.

Twitter user, @Jessicabrii commented: “What kind of backhanded congrat is this. Never heard it be called simple on MoTD. But 22 women playing a [email protected]@of course they’d win. Simples. Side eye for real.”

@MullinsShere wrote: “Not clear what your point is? NEVER have you been a champion for  women’s football so I suspect they don’t care for your support now.”

@Rahj1 remarked: “Such a gracious comment from a person who has amassed a fortune from ‘chasing a ball about’ and making inane comments. Get over yourself Lineker the ladies did what you failed to do.”

It wasn’t long before Gary took the opportunity to correct those who had taken issue with his comment.

The former striker famously made the comment after England was knocked out by Germany in the semi-finals of Italia ’90.

“Football is a simple game,” he said at the time.

“Twenty-two men chase a ball for 90 minutes and at the end, the Germans always win.”

In view of his 8.4 million followers, he penned: “The post Italia ‘90 quote for Context. You’re welcome.”

People flocked to comment, as @officialsi penned: “Shouldn’t need to explain, if people didn’t get the irony, that’s on them.”