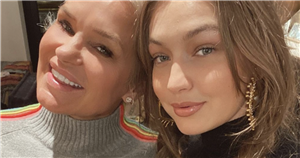 Gigi Hadid has released a statement after her mother Yolanda’s allegations against Zayn Malik striking her reached the news on Thursday, 28 October.

“Gigi is solely focused on the best for Khai. She asks for privacy during this time”, a representative for the 26-year-old told E! News.

This comes after it was reported that Gigi and Zayn, who welcomed their first child together in September 2020, have split up.

“They are not together right now. They are both good parents though,” a source told People magazine.

“They co-parent. Yolanda is of course very protective of Gigi. She wants the best for her daughter and grandchild.”

The supermodel has been in a relationship with Zayn since 2015, breaking up for periods before reuniting in 2019.

Gigi became pregnant a year later with their first child, daughter Khai, and the couple had been together ever since beknown to the public.

Former One-Directioner Zayn suggested the pair had broken up in his official statement in response to the allegations of him lashing out at Gigi’s mother, Yolanda, saying that he wishes to restore a “peaceful family environment” that allows him to “co-parent’ his daughter.

Former Real Housewives star Yolanda, according to TMZ, accused Zayn of striking her during an argument “at some point last week” and planned to file a police report – although no such report has been filed.

The rest of the alleged incident remains untold, however Zayn did insist in a second statement given to TMZ that Yolanda had given “false allegations” and hoped she would “reconsider” these.

'”I adamantly deny striking Yolanda Hadid and for the sake of my daughter I decline to give any further details,” the 28-year-old said.

“I hope that Yolanda will reconsider her false allegations and move towards healing these family issues in private.”

This news has drawn media attention to the Malik and Hadid family significantly. Gigi’s sister Bella Hadid was spotted in New York City when allegations broke, leaving lunch with a businesswoman, while brother Anwar was seen out to dinner with girlfriend Dua Lipa in London.

The allegations have also heated up the tension between the families involved as Zayn’s sister Waliyha posted several subliminal messages on Instagram Stories in support of her brother. In one post about family, she captioned: “All we need. @zayn you are so loved by us all.”

This was followed by a couple of reposted family photos including Zayn and a message about Karma that read: “Karma comes after everyone eventually. You can’t get away with screwing peoples over your whole life.”