Home » Celebrities » Gordon Ramsay sells Cornwall home for £7.5m in most expensive sale ever in county 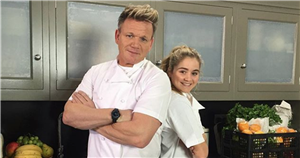 TV chef and well-known potty mouth Gordon Ramsay has sold one of his Cornwall homes for £7.5million which is the most expensive sale in the recorded history of the county.

The host of Future Food Stars, 55, sold Daymer Bay House in Trebetherick for profit after he originally bought the property for £4million back in 2016.

At one point, Gordon owned three Cornwall-based properties and after his most recent sale he is now down to just one. Alongside his recent record-breaking house sale price, the purchase of the Rock property in Cornwall in 2015 for £4.4million was the second highest sale in the county at that time.

The family demolished the original 1920s five-bedroom property and replaced it with a main house as well as a smaller second property, known as ‘The Garden House'.

Additions to the property, including an outdoor pool, wine cellar and boathouse are believed to have made the home rack up a expected market price of £6million. Gordon and his wife Tana divide their time between the three homes they own in Cornwall, London and Los Angeles, each with its own level of grandeur.

The couple have five children, Megan, Holly, Jack, Tilly, and Oscar who have been brought up in the family's impressive homes.

The family's other Cornwall home is a picturesque property with stunning views of the Cornish coast which has been converted into a mansion fit for the TV star. The family's London townhouse is worth an estimated £7 million and appeared on TV in the CBBC show Matilda and the Ramsay Gang which gave an insight into the celebrity chef's luxurious home.

Gordon's daughter Holly also recently shared a rare insight behind the doors of the family's bedrooms in the £7million London mansion.

The 22 year old, who had recently returned from attending Brooklyn Beckham and Nicola Peltz's extravagant wedding ceremony filmed a video of herself as she got ready to head to dinner with her parents. Download OK! magazine's FREE app and get all the latest gossip straight to your phone

Holly's bedroom is a lavish mix of exposed wood beams with white walls and the enormous space boasts a large bed in the centre of the luxurious brown textured carpet.

Gordon also had to recently defend his decision to head to the family's Cornwall home for lockdown following criticism from locals that he and his family had 'snuck down'.

Speaking to Radio Times, the TV chef said: "God knows why we took so much s**t from the Cornish.

"We lived down there; we just hadn’t been down there for a long time.

"We didn't sneak down there at all."