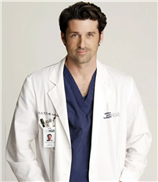 Grey’s Anatomy is coming back for Season 19.

This much we now know for certain, following an early renewal announcement made a few weeks ago by ABC.

But might one of the show’s ultimate fan favorites also be coming back at some point in the near future?

Fans can’t help but wonder in the wake of a mysterious and intriguing Tweet posted by the official Grey’s Anatomy social media account.

“Not Wordle, just a sticky note,” the very recent message shared online by the series reads, alongside 25 small blue boxes to resemble the popular spelling game.

For those unaware, Wordle is a word/spelling game that’s taken over the nation in recent weeks in which players are given six attempts to guess a daily correct word.

After each incorrect guess, the game gives letter placement hints by color. Of late, individuals have taken to Twitter to share their progress using colored emoji squares.

So that’s the Wordle side of things.

Grey’s Anatomy may very well just be joking about it with this Tweet.

… it may be hinting that Patrick Dempsey is set to once again reprise his role as Derek Shepherd.

A number of astute viewers couldn’t help but note that the illustration above resembled Derek’s low-key Post-It note wedding to Meredith Grey during season 7.

“Derek shepherd is alive Confirmation?” one person tweeted on Thursday, as another agreed:

“Derek is coming I know.”

Such a notion would have been considered outrageous just a few months ago, of course.

The beloved character known as McDreamy was killed off on Season 11 … after Dempsey made it clear he wanted to leave. (A recent tell-us described how Dempsey terrorized the set prior to his departure.)

Much to the shock and delight of viewers everywhere, Dempsey actually reprised the role of Derek for a four-episode run in late 2020, showing up in a number of fantasies Meredith had while she was suffering from a COVID-19-related coma.

“It was a great opportunity to catch up and say, okay, what can we do for all the frontline responders?” Dempsey explained of a call he had with Ellen Pompeo that prompted his return at the time.

He continued back then:

“I’ve been tracking what Grey’s had been doing with giving masks, and making sure that people had the right equipment, and it came from that place — okay, what can we do to make people feel better, to give some comfort in this time of uncertainty, and that’s how it began.

“And it was really a wonderful experience to go back, to work with [director] Debbie [Allen].”

Elsewhere, Dempsey referred to the shooting of these appearances as “healing” and “really rewarding.”

His character remains dead, of course, but Dempsey did hint just over a year ago that he wouldn’t slam the door shut on another cameo.

“I’m glad we did it this year. And [showrunner] Krista Vernoff did a fantastic job telling the story.

“It was just a great way to give people some hope.”

Well, here it is now. People definitely have hope!