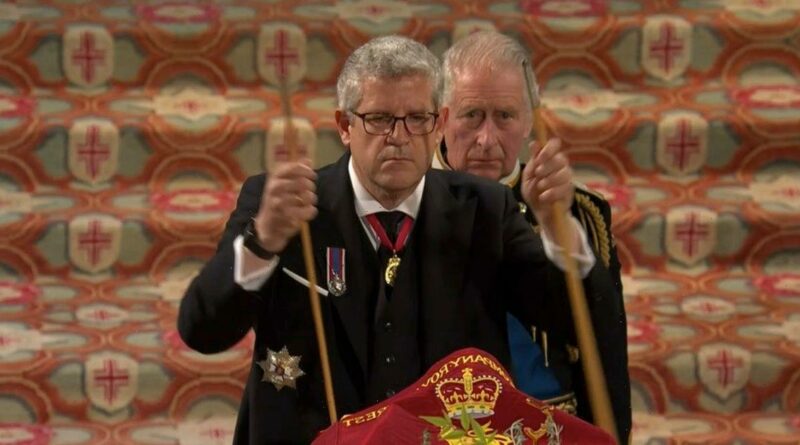 The Queen's committal service saw the Royal Family bid farewell to their beloved matriarch at St George's Chapel on the grounds of Windsor Castle on Monday 19 September.

The service, attended by around 800 people, was discussed with Her Majesty over a number of years and all the prayers and hymns were chosen by her – apart from one.

The Queen left one hymn to be chosen at the time, and after a discussion between the King and the Dean of Windsor David Conner, the hymn chosen was Westminster Abbey adapted from the Alleluyas in Purcell’s O God, Thou art my God. Prior to the final hymn, the Imperial State Crown, the Orb and the Sceptre was removed from the coffin by the Crown Jeweller and, with the Bargemaster and Serjeants-at-Arms, passed to the Dean who placed them on the altar.

The removal of the crown from the coffin to the altar is poignant, because in 1953 the crown was taken from the altar in Westminster Abbey and placed on the Queen’s head, marking the start of a 70-year reign.

At the end of the final hymn, the King placed The Queen’s Company Camp Colour of the Grenadier Guards on the coffin.

At the same time, The Lord Chamberlain "broke" his Wand of Office and placed it on the coffin in an emotional moment. This is to create a symmetry with the three Instruments of State that have been removed. The coffin was placed on a catafalque draped in purple velvet and was slowly lowered down into the royal vault as the Dean of Windsor said: "Go forth upon thy journey from this world, O Christian soul."

The Sovereign’s Piper played a lament, A Salute to the Royal Fendersmith, from the doorway between the Chapel and the Dean’s Cloister during which he walked slowly towards the Deanery in the Cloister so that the music inside the Chapel gradually faded.

During the service, the King sat in the seat which was occupied by the Queen when she came to the chapel, positioned closest to the altar.

Tradition ran through the service in its music as it featured several pieces that were also heard at the Duke of Edinburgh’s funeral and other major royal events. JS Bach’s Schmucke Dich, O Liebe Seele – Adorn Yourself, O Dear Soul – (BWV 654) a piece for organ, was played with a number of others as the mourners waited for the service to begin.

Another was Vaughan Williams’ Rhosymedre, a firm favourite with the royal family with the music being performed at the wedding of Diana, Princess of Wales and Charles, and at Philip’s funeral.

Nimrod by Sir Edward Elgar was heard at the Queen’s coronation in 1953 and was also played before the committal began.

Lord Sentamu, the former Archbishop of York, was reportedly part of the team which helped devise the original order of service for the Queen’s state funeral. The cleric told BBC News the Queen knew the psalms by heart and Psalm 121 – also featured at the Queen Mother’s Funeral in 2002 – will be sung at her committal.

The service eded with Bach’s Prelude and Fugue in C Minor (BWV 546) played after the national anthem, which was also heard at the end of Philip’s funeral.

The Queen will be buried with her late husband Prince Philip in the King George VI Memorial Chapel.

A private burial service, attended by the King and other members of the royal family, will take place on Monday evening.