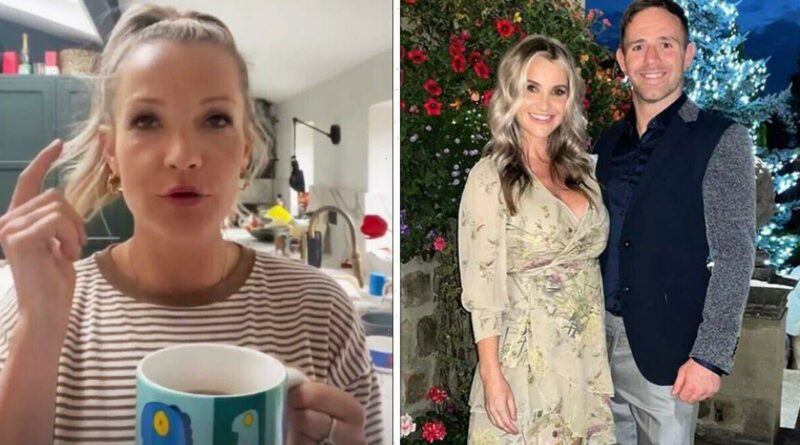 Helen Skelton has returned to Instagram without her wedding ring, a week after announcing her split from her husband of eight years, Richie Myler. The Countryfile star, 38, made the comeback yesterday where she addressed her fans while holding a cup of tea in her kitchen, after it was claimed her estranged Leeds Rhino player husband, 31, has “gone abroad” with his new girlfriend.

The mother of three was filming an advert for Smart Energy GB, a non-profit, government-back campaign to encourage people to use smart meters in their homes as a way of monitoring their energy consumption.

Helen looked her usual chipper self as she sipped a cup of team while discussing the campaign.

The Cumbria-native wore her blond tresses in a high ponytail away from her face as she spoke to her followers.

She wore a brown and white striped top and accessorised with a pair of gold earrings and a delicate gold chain.

Helen wore a soft smokey eye and a natural face of makeup for the clip.

She appeared to be in her kitchen as fashionable teal cupboards and a gold sink with a marble splashback could be seen behind her.

As she gripped her mug, it was apparent the star’s wedding ring was nowhere to be seen.

It comes as Countryfile viewers noticed her absence from the show’s most recent episode last week.

Additionally, Helen’s estranged husband rugby player Richie is said to have “jetted off abroad with his new love interest.

Last Monday, Helen broke the news of the heartbreaking split with her social media followers and confirmed Richie had “left the family home”.

But now sources close to the TV star have claimed that the sportsman went back to pick up his passport ahead of his break with his “new love interest.”

An insider claimed: “He said he was going on holiday.

“It’s thought he’s taken his new missus so they can be out of the public eye.”

They went on to claim that the former Blue Peter presenter is doing well, adding that mutual friends of the former couple think she’s been treated “appallingly”.

“Helen’s holding it together well, which is admirable given she was blindsided by his new relationship,” they claimed to The Sun.

It comes days after it was reported that the rugby player has started a relationship with a “younger, successful businesswoman.”

The same publication told how the pair are just “in the early stages of a relationship.”

Last week, Helen confirmed that she and the rugby player are no longer together to her 284,000 followers.

The TV presenter wrote: “Very sad to say that Richie and I are no longer a couple.

“He has left the family home. We will be doing our best to co parent our small children,” she ended the post alongside a series of broken heart emojis.

Richie has not yet broken his silence on the split.