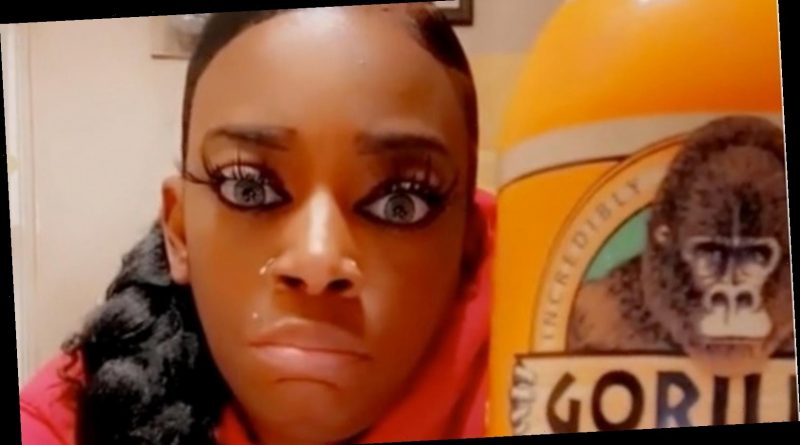 It seems like many people had sympathy for Tessica Brown, aka “Gorilla Glue Girl,” from the looks of her GoFundMe Page. But first, let’s recap Brown’s difficult plight. Brown went viral on TikTok in February 2021 when she sprayed her hair with Gorilla Glue instead of her usual Got2b hairspray after running out of her go-to product, per People. She documented her hair saga, calling it a “bad bad, bad idea,” adding, “My hair has been like this for a month now. It’s not by choice.” In the shocking video, she continued, “I’ve washed my hair 15 times and it don’t move.”

Brown continued to share her journey with her followers and reportedly spent 22 hours in the emergency room trying to remove the adhesive from her hair using acetone, according to TMZ. Sadly, the remedy didn’t help very much and made her scalp burn. However, Brown finally found relief when she visited Beverly Hills plastic surgeon Dr. Michael Obeng, who was able to remove the glue with a four-hour operation that would usually cost $12,500 but was free of charge for Brown.

Now it looks like Brown’s GoFundMe will take care of her post-operation expenses. We reveal below how much money Brown’s Gorilla Glue mishap brought in.

After “Gorilla Glue Girl” aka Tessica Brown shocked the internet with her sticky situation, she garnered a lot of support from those watching her mishap from home. The TikToker created her GoFundMe on Feb. 8, 2021, with the hope of raising $1,500, but to her surprise, she raised more than $13,000 in just one day, per the New York Post. By Feb. 12, Brown raised a total of $22,110.

Although Brown has yet to share how she intends to spend the crash, she is surely thrilled to finally be able to run her fingers through her hair again. “Now I wish I would’ve waited to cut my ponytail off,” she said in a video after the operation to remove the adhesive, per TMZ. However, she did say that she is planning to get hair extensions when doctors allow her to in six weeks, so her newfound wealth could help pay for her makeover.