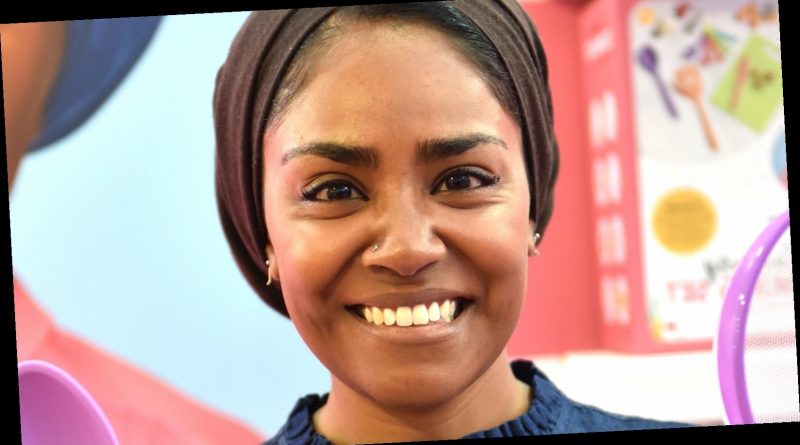 Nadiya Hussain hasn’t stopped since she won The Great British Bake Off back in 2015. The winning cook has written books, hosted TV shows, and even came out with her own line of homeware for Unique & Unity. Now, the mom of three is going back to her “first true love” — aka, baking — for a new Netflix series. According to People, Nadiya Bakes starts streaming Feb.12. In the trailer, Hussain confesses that “baking really is [her] happy place (via YouTube).

In the show, Hussain will showcase some of her favorite desserts, while also shining a light on other bakers she loves. Overall, it has that same lighthearted and positive vibe that makes The Great British Bake Off so beloved, so fans of the show will want to tune in. Plus, it’s a great introduction to Hussain if you aren’t too familiar with the baking superstar. However, if you are a fan, you’ll be surprised to find out a bit of these untold truths as well.

Nadiya Bakes isn’t even the only new show Nadiya Hussain will be a part of this year. The Bake Off winner is lending her voice to What’s On Your Head?, a children’s show for BBC’s CBeebies, according to Variety. The show is meant to educate kids on the importance of wearing face masks, as well as other things like, hijabs and firefighter helmets for religion and work.

Hussain is a Muslim woman who wears a hijab, and has said that it causes some stress when traveling. When filming her show Nadiya’s American Adventure, Hussain revealed that she was almost always stopped and searched at the airport, which just added to her anxiety (via Digital Spy). But anytime the baker faces any kind of prejudice like that, she said it “strengthens [her] belief in who [she is] and the choices that [she makes]” (via The Independent).

As much as she would like to be just seen as a baker first, she realizes that she is “a brown Muslim woman, working in a very male-dominated, Caucasian industry,” and if she doesn’t “create that space, who will?” (via The Guardian). It’s a tough job, but Hussain is exactly the person to do it.

Back in 2016, Nadiya Hussain baked a cake for the coolest person you can think of — Queen Elizabeth. The TV host was fresh off the heels of her Bake Off win when she was asked to make a cake for Her Majesty’s 90th birthday. The cake was an orange drizzle sponge with purple and gold fondant, according to The Sun, and when presenting the cake, she wasn’t given much instructions. In an appearance on The Jonathan Ross Show, she joked that since she wasn’t given any protocol, she asked if she could high-five the queen, and they said, “no” (via YouTube).

When Hussain was on The Graham Norton Show, she also talked about the experience and said the queen introduced her to Prince Philip. It was a big moment as she said, “You know you’ve made it when she introduces you to somebody else.” However, all Prince Philip wanted to know was what flavor the cake was (via YouTube). The hilarious moment just showed what a great sense of humor Hussain has as well.

The first time Hussain met her husband they got engaged

Hussain said in an interview on Loose Women that the day she met her husband Abdal Hussain was the day they got engaged (via YouTube). However, it wasn’t love at first sight that caused this. The baker was actually set up in an arranged marriage when she was 19, and “the second day they met was the day [they] got married.” Hussain has been very open and honest about the Islamic tradition, even saying that her wedding day “was one of the worst days of [her] life” (via Hello Magazine).

It actually took her a few years (and a few kids later) to fall in love with her husband. According to Closer, Nadiya Hussain revealed that she went from not knowing her husband, having two kids with him, and then falling in love. The two now share three children together. They even re-married back in 2018. This time, the day was full of love and happiness.

Not only is Hussain making a positive change in the baking world, but she’s opening herself up to help those suffering from anxiety as well. The TV personality created the documentary film Nadiya: Anxiety and Me for the BBC back in 2019 to explore her own anxiety. In a clip from the doc, Hussain reveals that having anxiety is one of the “most lonely” and “isolating things to have,” and talking about it is “half the healing” (via YouTube).

Recently, Hussain revealed that quarantining due to the coronavirus pandemic has caused her to suffer through a few anxiety attacks (via BBC News). She said that her family recognizes when she’s having a bad day, and they can make it better. Her children in particular are helpful, and apparently will “shove the cat” in her face when she’s down or bring their bird over to try and cheer her up. That’s pretty adorable.

While Nadiya Hussain is known internationally as being one of the best bakers of all time, she didn’t quite get those skills from her mother. According to The Guardian, Hussain’s mother never used their oven growing up for cooking. It was instead used for storage. She actually joked that the first time she saw her home economics teacher baking a cake, she thought she was a “sorceress.”

Now that her daughter is a Great British Bake Off winner and cake-maker for the queen, does Hussain’s mother use the oven? The answer is no. According to The Times, her mother still uses their oven at home just to store frying pans. I guess when your daughter can make a delicious three-tier cake for you, why would you ever have to learn for yourself?

Despite her mother not teaching her how to bake, Hussain loves getting kids in the kitchen. Just last year, the mother of three came out with baking and cooking kits designed for children (via Good Housekeeping). You can even check out a few videos on YouTube showcasing Hussain and her daughter, Maryam, using the sets together. They’re super adorable and make you wonder if one day Maryam will be following her in mother’s footsteps.