Game of Thrones has been doing musical cameos every since the series third season when it brought in members of Coldplay to perform at the Red Wedding. Since then they’ve had plenty of musicians on screen, including Sigur Ros playing the Purple Wedding and the heavy metal band Mastodon as beyond the wall wights, among others. But nothing quite upset fans like the Ed Sheeran cameo last season. It even upset former cast members apparently. Recently, one admitted as much: Kristen Nairn, the actor who played Hodor hated Ed Sheeran’s Game Of Thrones cameo.

But why was Ed Sheeran’s cameo so upsetting, while these other ones went over just fine? It was the in your face nature of it. In the earlier seasons, musical guest stars were not front and center. The show hired Coldplay musicians to play the Red Wedding, including drummer Will Champion. But it’s not like Chris Martin got up on stage and wailed the lyrics to "The Rains of Castamere" for a good three and a half minutes before the Starks were massacred. Sigur Ros didn’t take center stage with the pie at the Purple Wedding before Joffrey died.

Mastodon isn’t even recognizable, the only way fans knew it was them was via the PR still that was released, touting their existence at the Battle of Hardhome. In fact, most of the cameos, musical or not, never take front and center, they’re blink-and-you’ll-miss-it, like Snow Patrol frontman Gary Lightbody’s role, where he’s on-screen for all of ten seconds, in a line of horse-riding extras. 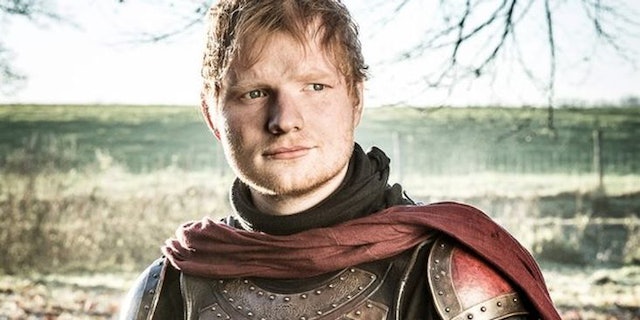 That seems to be Nairn’s problem with it, though he claims he doesn’t really like any of the cameos.

This was the problem. When the show hides a semi-famous musician in a crowd scene, or in a band of instrument players off to the side of the action, it doesn’t distract fans from the story.

This, on the other hand…

Sheeran, by the very nature of the cameo, had to be front and center. His job was to sing a song from the book, one the show left out when it cut the "Symon Silver Tongue subplot" from Season 2. But there’s no rhyme or reason for him to do so.

In the original context, the song is sung the Red Keep’s troubadour, Symon Silver Tongue. It’s about Tyrion’s secret affair with Shae. The "Hands of Gold" refer to the Hand symbol. Symon knows Tyrion will realize what the song is about, though the rest of the palace probably won’t. It’s blackmail. (Tyrion’s response is to have Bronn "remove" Symon.) The song then gets stuck in Tyrion’s head after he murders Shae.

But the showrunners decided Season 2 didn’t need this, nor did Tyrion need to have it stuck in his head all through Season 4. So why bring it up now, except to have an excuse to hire Ed Sheeran and put him front and center? It’s just this random moment when Arya Stark runs into Ed Sheeran in 2017 and he’s singing an easter egg the show got left by the wayside in 2012.

Of course, no one liked it. Not even Hodor.