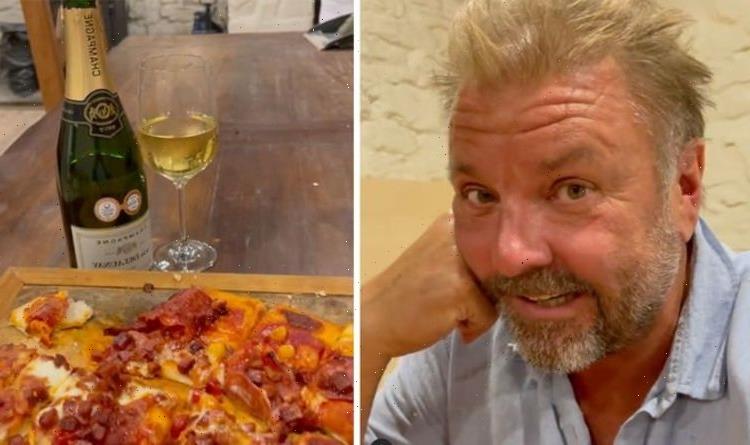 Homes Under The Hammer star Martin Roberts, 58, told fans that he had received some “exciting news” on a new TV project that he is working on last night. The television presenter took to Instagram to speak of the “very hush hush” project as he celebrated with a bottle of champagne and a pizza.

Martin uploaded a video of himself talking to fans, in view of his 13,100 followers.

He said that it was his last “unhealthy binge” before vowing to get “fit as a fiddle” for the upcoming project.

Alongside the footage, he wrote: “So..some exciting news today on a TV project I’m very proud to now be part of.(sic)

“Very hush hush but tonight it’s time for the last unhealthy binge for a while…could I be naughtier?”

In the accompanying clip, he filmed his celebratory meal before spinning the camera around to talk directly to his followers.

“So what you are seeing here is a bit of a last supper if you like because there is something very, very, very interesting coming up,” he said in the video.

“And drinking and eating pizza for the next few months is definitely going to be out of the window.

“I’ve got to get myself fit as a fiddle, but I can’t tell you why,” he signed off, teasingly.

Many took to the comments section of the post to share their thoughts and try to guess what Martin is preparing for.

“Congratulations!!! Can’t wait to see what it is,” one user remarked.

“Are you going to be a ‘strictly‘ contestant?” another asked.

“How exciting!!!! I wonder if you’re going to a health farm type thing like the diy boys did that time in Thailand!”(sic) a fourth suggested.

“I’ve guessed it. It can’t be I’m a celeb… you done that. What tv show were you need to be fit, training starts 3mths before… mmmmm could it be something on ice?”(sic) a fifth follower offered, guessing a stint on ITV’s Dancing On Ice.

“You are a tease [laughing emoji] enjoy your wine and pizza,” another fan said.

Martin famously took part in I’m A Celebrity… Get Me Out Of Here! back in 2016, coming sixth in Ant and Dec’s reality show.

It is also unlikely that Martin will take place in Strictly Come Dancing as the celebrity contestants for the 2021 series have already been announced.

During the final of this year’s Dancing on Ice competition it was confirmed that the programme would return in 2022.

Fans will have to stay tuned to see what Martin has got planned for the near future.