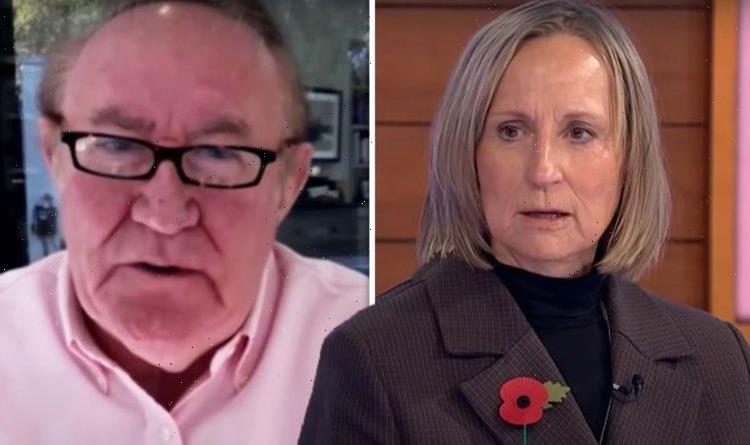 Loose Women panellist Carol McGiffin, 61, criticised Andrew Neil, 72, after he urged the public to get their Covid vaccinations and voiced his opinion on “how well” vaccine passports work.

Andrew told his one million Twitter followers: “I’ve had my third jab. All Pfizer. And I strongly recommend everybody to do the same.

“I have also seen how well vaccine passports work.

“I don’t believe in mandatory vaccination, but if you don’t get jabbed you need to realise there are consequences on where you can go.”

Carol retweeted Andrew’s message and said, in view of her 447,000 followers: “Good. God. How the mighty have fallen [crying emoji].”

The comments sparked a debate amongst Twitter users, with many seemingly disagreeing with Carol.

One user, Tony Prince, said: “You don’t bat an eyelid when a dentist injects you, or a hospital administers something when you’re ill, so why are you worried about these jabs. Designed to do the same thing and keep you safe.”

Becca echoed: “We’re so privileged to have this vaccine, please be safe and accept it. I had Covid in the summer and only had it very mild. My brother, a very healthy policeman caught it unvaccinated, ended up in hospital for three weeks…coincidence?”

Jonathan Lusby penned: “I’m not a big fan of Andrew Neil but I can’t see the problem with that tweet. Seems perfectly sensible to me.”

The discussion had begun earlier yesterday when Andrew and Julia Harley-Brewer got into a Twitter spat over the subject.

“They also encourage younger folks to be vaxxed, where the UK is lagging. And, as you say, vax works.”

“They are a divisive political tool of punishment aimed at blaming people who aren’t jabbed. Since when do we punish people for making health choices we don’t agree with?”

The former GB News presenter then replied: “Covid cases rising used to result in huge increases in hospitalisations and deaths. Now they don’t. Other than vaccines, what’s your explanation?”

Carol has previously voiced her opinion on vaccines and vaccination passports.

Back in August, the Loose Women star retweeted a clip of French nationals boarding a train as stewards handed vaccinated passengers a blue wristband.

Carol said the decision was “wrong, worrying, depressing and frightening”.

She also found herself in an on-air row with Loose Women co-star Kaye Adams last month over whether carers should lose their jobs if they refuse the vaccine.

Kaye said: “If someone had come in and said I’m choosing not to get vaccinated, I would have had a problem with them looking after my mum and dad.”

Carol begged to differ, stressing “a lot of people wouldn’t” and that she would feel uncomfortable to know the NHS could force workers to take the jab for the sake of remaining employed.

She added that it was “frightening” to think of people’s freedom being taken away and medical intervention should be out of the question.

“They are forcing people to get injected when they don’t want it, and they think they don’t need it.”