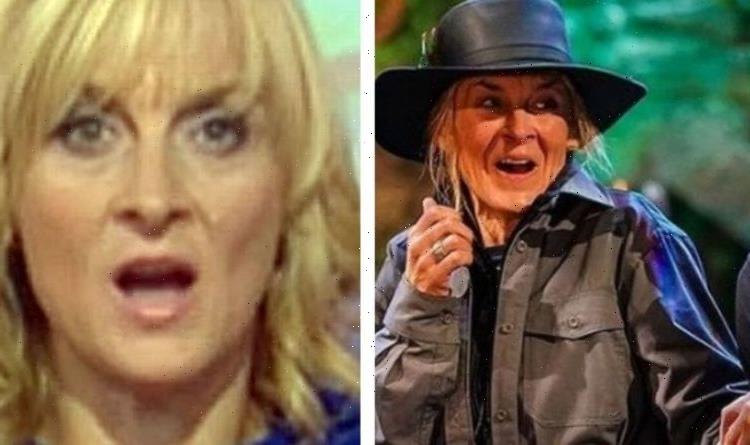 Former BBC Breakfast star Louise Minchin empathised with her I’m A Celeb colleague, who, during the show, had been forced to view squirrels as a snack. She offered a display of Twitter support for her, encouraging that she understands the struggle.

“Ever since I ate squirrel in the castle I just cannot look at them the same when I see them on the streets,” BBC Radio 1Xtra DJ Snoochie cringed.

The 53-year-old wrote a simple and succinct message back showing solidarity, admitting: “I know the feeling!”

Louise had played a central role in providing meals for the camp, cooking up creations that included squirrels – so she knew exactly what Snoochie had been referring to.

Regarded by some as a woodland friend or, in occasional cases, even a much-loved household pet, many are against chowing down on the friendly rodent.

Plus, with a restaurateur husband, David Minchin, Louise has probably been accustomed to much tastier snacks.

However, to be in the spirit of the I’m A Celeb landscape, they had little choice but to take part.

Meanwhile, it’s not the only time that Louise has had a controversial episode with food.

She suffered another major culinary clash back in 2007, when her husband became embroiled in a bitter row with celebrity chef Marco Pierre White on ITV’s Hell’s Kitchen.

The angry exchange quickly led to the couple getting unceremoniously thrown out of his restaurant on the show, and for Marco to refuse to serve up a single bite more.

David had initially complained that his Vinaigrette of White Asparagus starter dish was “cold” and “bland”.

Refusing to accept his opinion, Marco had begun raging.

“It’s far too cold, like it’s been taken straight out of the freezer and it’s piled like a stack of railway sleepers on a white plate,” David argued, while Louise was left red-faced.

Labelling him a “pompous f***er”, Marco abruptly briefed the waiter to tell the open-mouthed couple: “Unfortunately you are not going to enjoy your evening [so] we are not going to serve you any more food.”

Louise gasped incredulously: “None at all?”

Marco’s uncompromising response was clear: “If he wants to apologise I’ll feed him.

“But he’s got to come and see me. I want to see the whites of his eyes.

“I want him to be convincing otherwise I’m not feeding him and he can go home.”

The outburst enraged David, who walked towards the kitchen to confront the chef as if he meant business, while a panicked Louise repeatedly shouted: “No, no, no, no!”

“Say sorry or go. Think of your guest,” demanded Marco.

Consequently, the couple left without so much as having caught a glimpse of their mains.