James Jordan, 41, suggested Curtis Pritchard, 23, was “clearly not into” Maura Higgins, 28, after the dancer declared he was too “tired”. The former Strictly Come Dancing professional analysed the couple’s relationship in view of his 255,000 followers after watching Love Island 2019 last night. He also hit out at the “boring” instalment, which saw a number of the couples embark on special dates. James tweeted: “Just catching up on @LoveIsland and the whole date thing bores me senseless.”

Curtis is clearly not into Maura either because no matter how tired men get they are never too tired for a bit of fun in the sheets.

Addressing Maura and Curtis’ intimacy issues, he added: “Also Curtis is clearly not into Maura either because no matter how tired men get they are never too tired for a bit of fun in the sheets.

“Especially that early in a relationship.”

Fans took to the comments section to speak out on James’ views about the couple’s romance.

One fan wrote: “He keeps avoiding her every time she says she likes him – just a cheesy smile!”

“And he couldn’t even compliment her back after she said she likes him. The guy’s playing her like he did Amy! Tut,” a second Twitter user commented.

However, other viewers disagreed with the star, replying: “I don’t get what you’re saying? Curtis and Maura have been active between the sheets every night since they’ve been sharing a bed???? And there’s a massive difference in the way he acts around her vs. Amy. Loads more affection and interest.” 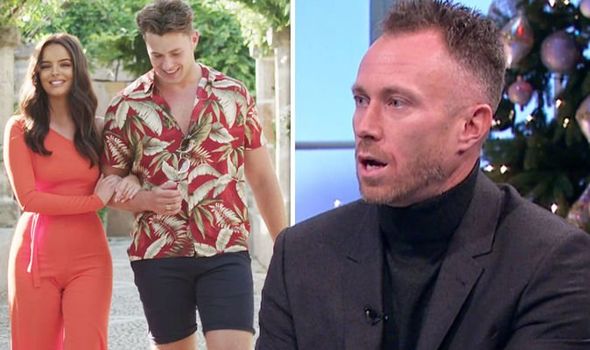 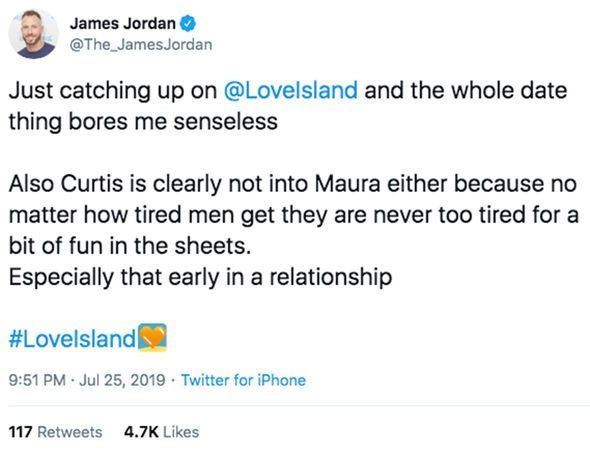 Another added: “I’m thinking it’s cos he knows his family are watching???! He’s clearly MASSIVELY into her!”(sic)

A third agreed: “Oh please maybe it’s because they’re on national TV and he’s been brought up well.”

Last month, James Jordan took to Twitter to speak out about Maura’s antics on the ITV2 reality show, which sparked a “sexism” debate.

Referring to the Irish model, he wrote on the micro-blogging site: “I love Lurpak butter because it spreads easy.”

He continued: “But nothing less attractive than a girl that would spread that easy. #Maura #LoveIsland.” 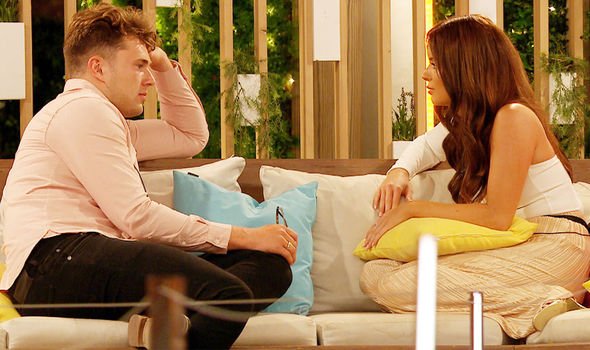 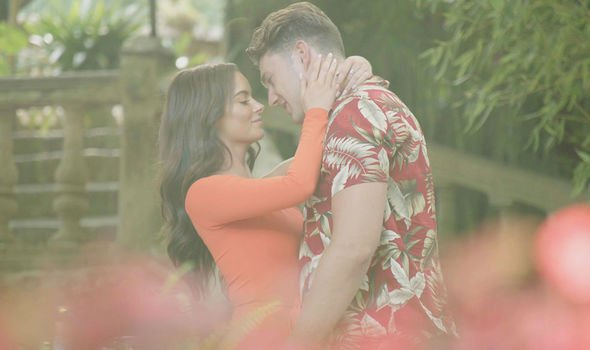 Some Twitter users took issue with James’ comment, with one responding: “I just projectile vomited everywhere and it spelled out the word sexism.”

After being accused of sexism, James hit back:  “Why? Because I don’t like girls that are easy?

Another Love Island viewer added to the argument by tweeting: “Misogyny is so last century.”

When he spotted the tweet, James replied: “Only my opinion mate. P.S. pro Brexit.”