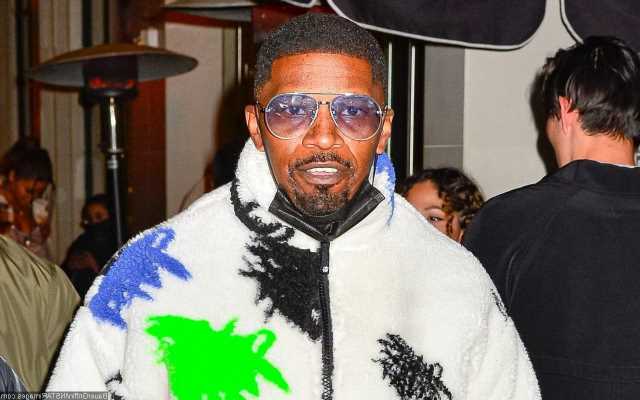 The 54-year-old ‘Day Shift’ leading man walks back to his white Rolls-Royce after he’s rejected at the door, but a doorman shows up, telling the Oscar winner that he is allowed to enter the venue.

AceShowbiz –Jamie Foxx was denied entry to Cardi B‘s birthday party. Although he was rejected at the door, the “Day Shift” leading man left without any hard feelings.

In a video shared by TMZ, the 54-year-old Hollywood star could be seen arriving at Poppy in Los Angeles along with a number of people. At first, he stepped out of his white Rolls-Royce and changed his shoes while being surrounded by photographers.

Shortly after that, Jamie and his group went back to his car. The photographers were left confused by his return, but the Oscar winner refused to answer their questions.

The doorman then showed up, reaching out to Jamie and telling him that he was allowed to enter the venue. In response, he said, “No, we not good. Nah n***a, it’s all good! I love you, but it was too much.”

According to a photo agency, Jamie was denied entry because he “had too many guests with him.” Other sources told the publication that “there were no hard feelings and Jamie handled the situation well.”

As for Cardi, the “WAP” hitmaker threw a burlesque-themed party to celebrate her latest milestone. On Tuesday night, October 11, she was seen wearing a sexy furry red outfit that flaunted her enviable figure. To complete her look, she also donned a matching huge feathery headpiece, red gloves and a pair of red strappy heels.

The red-themed lavish celebration featured a stage with “Cardi’s Dirty 30 Cabaret” written in the background. Among those attending the birthday bash was Cardi’s sister Hennessy Carolina, who looked stunning in a black-and-pink sexy outfit that she paired with a unique necklace.