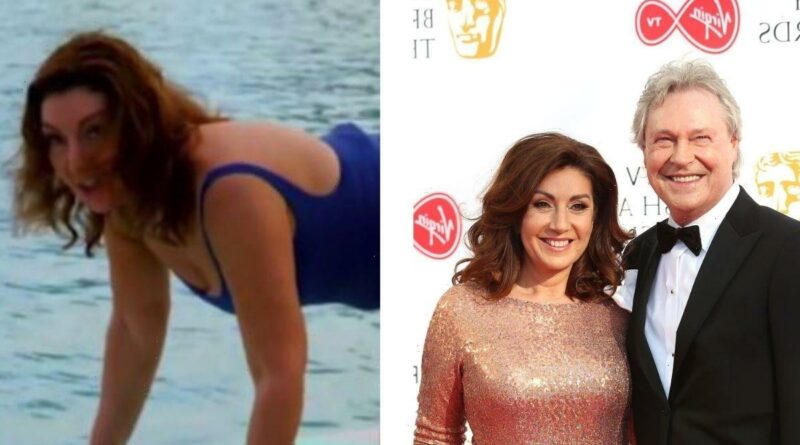 Jane McDonald, a singer and presenter, declared that working for the fans was her “healer” after the death of her fiance, Eddie Rothe, and began to throw herself passionately into work commitments to get over her loss. She told of her retirement U-turn in an unearthed interview.

“I was supposed to be retiring at the end of the year, but [work has] been the only thing I know what to do!” she confessed during an emotional interview on ITV’s Loose Women.

“It’s been my healer, being out with the fans!”

Her work stabilised her mood after a tough phase during the pandemic learning how to be her partner Eddie’s “nurse”, and then her total devastation after he died back in March 2021.

The 58-year-old did make a concession by opting to do more TV documentaries instead of fast-paced cruise ship singing tours, arguing that she was “getting on a bit now”.

Viewers have since been able to catch her Channel 5 shows, such as Holidaying With Jane McDonald: The Caribbean, as she throws herself back into filming.

Talking of her partner’s final months alive, she admitted that she regarded being able to take care of him as a “privilege”:

“Because it was in lockdown, nobody was allowed to take care of him, so I had to have a crash course in nursing [and do it myself],” she continued on Loose Women.

“Because it was lung cancer, they were scared of him getting Covid… I took over everything. That was a privilege.

“At first I thought, ‘How am I going to do this?’ But then you get a strength when you’re nursing your loved one.”

Then the Liquid Gold drummer, with whom she had been planning a blissful retirement, died.

When she went onto Loose Women for her first interview since his passing, she burst into floods of tears as her emotions were still so raw.

However she vowed to find the silver lining in her suffering and live each moment to the fullest from now on in honour of his life.

She told The Mirror that the harrowing experience of Eddie’s illness and death had taught her that “life is for living” and too short not to make the most of.

Longing for the pandemic to be over so that she could start to appreciate her blessings again, Jane has vowed to do more travelling.

She feels her future endeavours will be a way to pay tribute to her deceased love.

The Holidaying With Jane McDonald star has also set aside any self-consciousness, saying she’s no longer afraid to strip down to her swimwear in front of millions for national TV.

Recent filming led to scantily clad scenes in St Lucia but Jane is now nonchalant about it.

“I’m not bothered what I look like in a swimming costume any more, I don’t care,” she told chef James Martin on his Saturday show.

Cruising the Nordics with Jane McDonald airs on Saturday at 5:15pm on Channel 5.