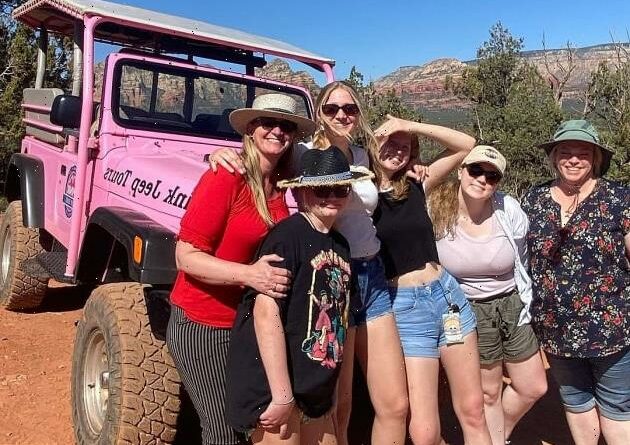 Christine Brown is no longer a member of the Sister Wives family.

But the mother of six will always be close to one of her ex-sister wives.

She and Janelle Brown have made that evident at this point.

Despite Christine announcing in November that she had left Kody and had even left Arizona altogether, the reality star has continued to hang out with her close pal Janelle.

On Sunday via Instagram, for example, Janelle uploaded a bunch of photographs that featured her on a mini vacation.

She wasn’t alone, either.

“Pink Jeep tour in Sedona yesterday! So much fun !!!” Janelle wrote alongside the snapshots. “I’ve wanted to do one for years.”

She then tagged Christine and thanked her good friend directly, adding: “Thanks @christine_brownsw for organizing it ! #sedona #pinkjeep #gooutside #redrock #vortex.”

In the months since her split from Kody, Christine has continued to hang out with Janelle, who has chosen to stick it out in her loveless relationship for some reason.

The two women previously enjoyed a trip to Disney World with their children in March, for example.

“Loving this vacation! Truely bought me my Maleficent ears! I’ve been wanting them for years!” Christine captioned a post on Instagram.

“And they actually smiled and posed for a photo!”

Christine and Janelle are still working together, too.

As previously detailed, the TLC personalities often promote a variety of weight loss supplements and other items on social media.

They even did so on this same trip to Sedona, stopping by the headquarters of Plexus, a company that sounds very much like a multi-marketing scheme… very similar to LuLuRoe, which is business that has landed Meri Brown in some scalding hot water.

“It’s incredible to feel incredible,” wrote both women as a caption to the following picture.

“After visiting the Plexus headquarters we are even MORE impressed with the standards this company upholds in business & products!”

Plexus is on the cutting edge of health science, with a range of products focused on every aspect of your health and happiness.

We help your body get rid of the bad stuff, pave the way to better digestive health, and feed your system to benefit the body and mind.

Our goal is to make products that are the highest quality non-GMO, 100% vegetarian, and gluten free, wherever possible. Most importantly, Plexus products work.

They’re all for health, so there’s health for all.

Back to Janelle’s personal life, though.

During the last season of Sister Wives, Janelle confessed that she’s had second (and maybe even third?) thoughts about her relationship with Kody.

“I’ve caught myself in the last few weeks really reflecting and being like, ‘Okay, look: do I still choose plural marriage?'” she said while speaking to Robyn several months ago.

“Yeah, I still choose it, but I’ve had to have that conscious decision with myself.”

Will she ever change her mind, however?

Like her friend Christine decided to do awhile ago?

“It’s given me a lot to think about, for sure,” Janelle added on Season 16 of where things stand between her and Kody.