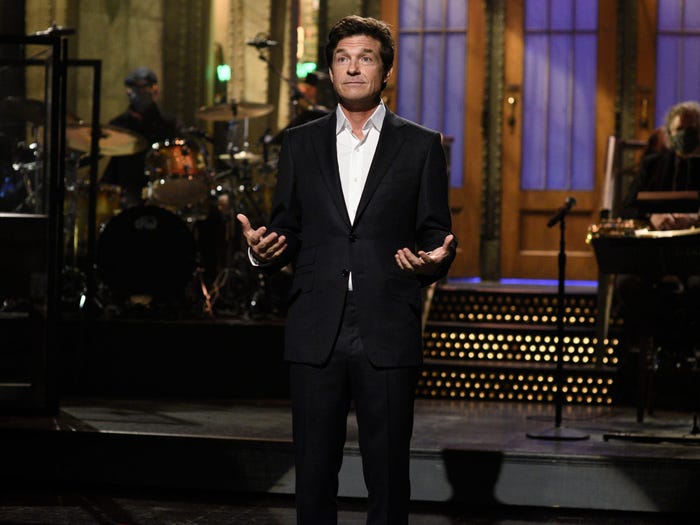 Jason Bateman hosted the latest episode of "Saturday Night Live," and the "Ozark" actor gave a monologue that included a rare throwback clip from the last time he hosted the comedy sketch show — in 2005.

Bateman started his story by setting the scene of his 2005 episode of "SNL," which included a live chimpanzee.

"If that show did that sketch today, they would use a puppet or a kid in a fuzzy suit for safety, but back then, they used a real male adult chimpanzee. This was 2005 — things were loose," Bateman said. "Things were so loose that at the end of the show, the monkey was allowed to take a bow with us up here. We're all hugging, we're saying good night, the credits are rolling, and then the monkey tried to kill me."

Bateman said that during the credits segment, he bent down to "say 'good job'" to the animal.

"I'm a nice fella — but not the chimp," Bateman continued. "The chimp unhinges his jaw, he flashes the teeth, and he tries to bite my entire nose off."

The monologue then cuts to a clip from the 2005 episode in question, which shows the actor kneeling alongside a chimpanzee. The animal appeared to show its teeth as Bateman described, and it lifted its hands to Bateman's face.

"I am smiling — but inside, I'm thinking, a monkey just attacked me and nobody cares. They just keep hugging," Bateman recalled of the 2005 "SNL" scene. "Anyway, I survived. And after the show, I was told by the animal handlers that Mikey, the monkey, wanted to apologize."

Following Saturday night's show, some viewers took to Twitter to point out that cast member Rachel Dratch, who was standing close to the actor and the animal in the 2005 scene, seemed to have a strong reaction to the chimpanzee's interaction with Bateman.

The most recent "SNL" episode also included a "cold open" sketch where cast member Cecily Strong impersonated Melissa Carone, the "star witness" from the Trump campaign whose testimony about voter fraud in the 2020 election has gone viral. The show also included a skit starring country singer Morgan Wallen, who was kicked off the show's roster two months ago after seemingly ignoring COVID-19 social-distancing guidelines.