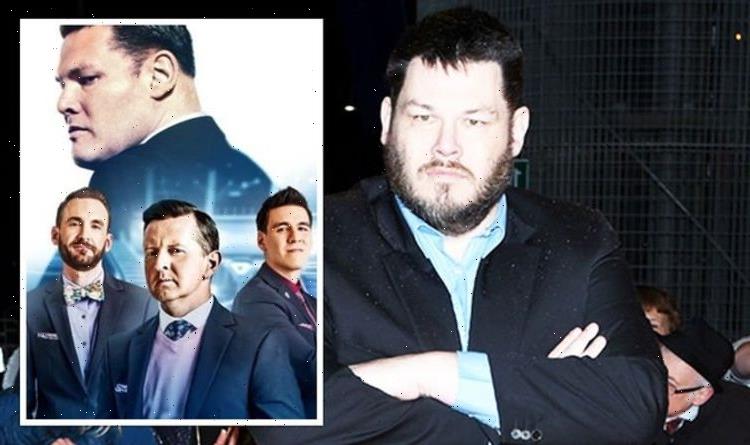 Mark Labbett recently joined the US network ABC for The Chase which aired this year. The popular brainbox has addressed photos that were used to promote the quizzing programme.

The Chaser, who is otherwise known as The Beast, spoke out ahead of the show being aired.

The 55-year-old said he noticed something unusual about his appearance.

The quizmaster suggested that the promotional image had been edited, after noting that his jawline looked different.

The small-screen star, who has been shedding the pounds in recent months, claimed the photo had been edited.

Jeopardy! stars Ken Jennings, Brad Rutter and James Holzhauer currently star as Chasers on the American version of the Chase.

The trio can be seen standing together on the advertisement for the show, with a side profile of Mark’s face also featured.

But the ITV favourite joked that his jawline “hasn’t been like that since 1984”.

Addressing the American version of The Chase, he commented: “I will say the one that has definitely been retouched is the artwork that they have just put out for The Chase US.

Addressing fan comments about his recent weight loss, Mark admitted the messages have been positive before revealing images of him may have been “retouched”.

“Most of the [fans] have been incredibly supportive,” he remarked. “People like to see that you’re trying your best.”

He continued: “The Chase has a wonderful fan base and they’re a lovely bunch. It’s been really nice to put the [weight loss] photos in.

“I can safely say there might be the odd one that has had a bit of retouching or whatever. If it has, it wasn’t me.”

Mark had previously been a part of the Chase US in 2013 and returned this year for a reboot on ABC.

The quizzing champion admitted he loves a “challenge” and enjoyed his time overseas.

He remarked: “Bradley [Walsh] has been so supportive. He’s been fantastic. My colleagues have as well.

“I went with ITV’s blessing which was very kind of them.”

The brainbox has also revealed that he would love to go it alone and secure his own show.

“I would love for ITV to give me the opportunity to host my own show,” Mark said.

“Let’s just say my agent is aware I’d like to do one but unfortunately the right project hasn’t come up yet. Two of my colleagues have had their own show, so I’m hoping that I’m going to get lucky at some point.”

Beat The Chasers airs tonight on ITV at 8.30pm.