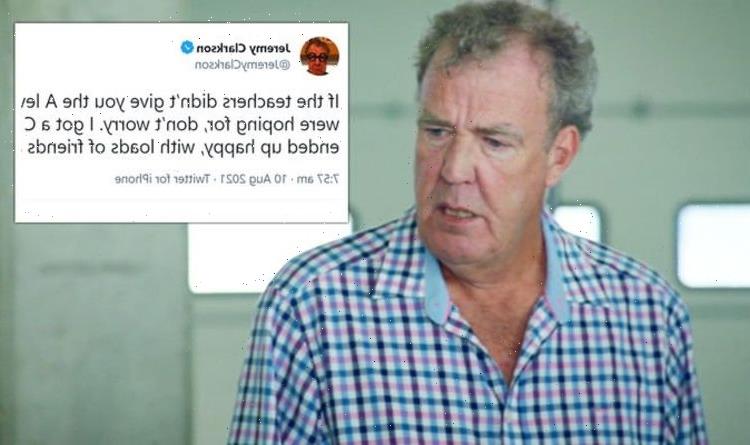 Jeremy Clarkson stuck to tradition by revelling in the fact he received poor A-level results as a teenager, but has still enjoyed a hugely successful career. The Clarkson’s Farm star has since been slammed for his tweet, after the presenter was accused of “misleading” people.

The 60-year-old is known for tweeting his grades and comparing them to his career.

Since 2014, Jeremy has shared how he performed in his A-levels along with a claim that if results are not what students expected, then don’t worry, as he went on to have a very successful life.

In previous years The Grand Tour host has shared how he has stayed on a superyacht in the Mediterranean, hired a French Chateau for the summer, has a choice of Range Rovers, despite only achieving a C and two U grades when he took the qualification.

In view of his 7.4 million followers, the car-enthusiast revealed he has “ended up happy”.

Jeremy penned: “If the teachers didn’t give you the A-level results you were hoping for, don’t worry.

“I got a C and 2Us and I’ve ended up happy, with loads of friends and a Bentley.”

But social media users appeared to take issue with the wording that Jeremy used in his post.

The TV farmer faced a backlash for suggesting that teachers “gave” the grades, rather than the students earning them.

One annoyed commentator wrote: “Teachers are not ‘giving’ grades … this is very misleading.”

Another pointed out: “Teachers don’t ‘give’ students grades – students earn them.”

“Could you change the wording about teachers giving the grades? It just makes it sound like we plucked it out of thin air when in fact we have to judge certain criteria to award grades,” a third added.

Others were ecstatic that Jeremy had shared his annual A-level motivation.

“I look forward to this tweet every year on A level results day,” a social media user wrote.

Another penned: “Thank you for reminding kids again that exams aren’t the only thing that can drive someone to success, Jeremy. It’s such a valuable lesson.”

“Aah, the annual Jezza A-level tweet. Something we can all rely on. All’s right with the world,” a third celebrated.

Another said: “Jeremy loves telling us every year.”

Jeremy’s post has received over 125,000 likes as fans inundated the presenter with comments.

His tweet comes as students in England and Wales received their A-level results today.

Following the coronavirus pandemic, some students were unable to sit exams due to Covid restrictions.

Schools have used a range of evidence for grades, including “mini-exams”, coursework and mock exams.