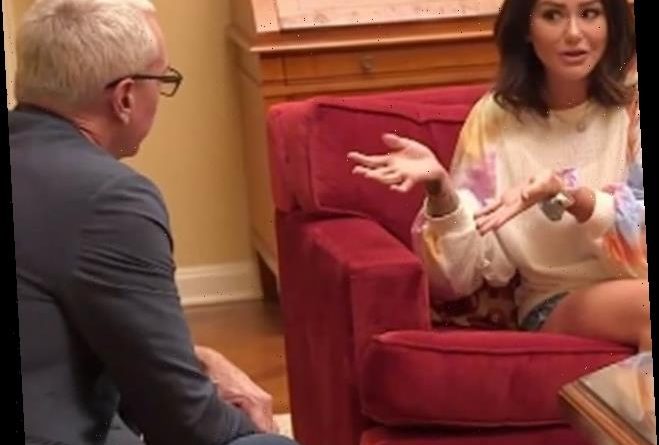 We had a first on Jersey Shore: Family Vacation this week.

Or, at the very least, a first for the first time in 10 months, as Jenni “JWoww” Farley and Angelina Pivarnick sat down at the same dinner table amid their never-ending feud and rivalry.

How did it go?

No one flipped a table. No one hurled any bottles of wine at anyone else.

Instead, there was simply something you rarely see on this loud and rowdy MTV franchise: silence.

The conversations between everyone were forced and awkward and the mood was very uncomfortable and, as Pauly put it, the meal felt “like a funeral.”

As Ronnie and Pauly commiserated in their room afterward, the latter came up with a bright idea that was definitely all his own and not something producers put into the script:

The muscle-bound star realized had Dr. Drew Pinsky’s number in his phone!

Why not call him up andd see if he could help!

And, what do you know… Dr. Drew said he was in!

This was stunning because Pinsky doesn’t normally like attention or getting involved in the business in others and isn’t on the network payroll. (We’re kidding.)

Before this quack arrived, it was time on the episode for the cast to once again dine together.

The guys got up at one point during the meal and figured they’d leave Jenni, Deena and Angelina alone to settle their issues… only this genius plan failed miserably.

“Did they think this would make us talk it out?” asked Jenni in a confessional.

Angelina and Jenni, of course, have been at odds since the former got married and her bridesmaids roasted her on stage at the reception.

Last Thursday night, Jersey Shore built up this showdown between JWoww (who hasn’t been featured often this season) and Angelina with Pivarnick saying she was scared of her ex-pal.

“If she comes in with no problems, that’s fine, but I don’t know. I don’t know what she’s gonna do. It’s just concerning to me that she’s unpredictable,” saiid Angelina.

Once Dr. Drew arrived in Las Vegas, he was caught up by the women on all on the wedding speech drama, as well as Jenni and Deena’s issues with Angelina’s toxic social media behavior after the debacle.

“I’m sure you heard about the wedding, I didn’t stand up next to her to like ruin her day,” explained Jenni to Dr. Drew, who she apparently idolizes.

“She watched the whole world think that the three of us ruined her wedding.

“She’s retweeting and liking the fact that finally the world is on Angelina’s side.”

When Pinskey asked whether Angelina was considered the “villain” before, but now had more fans on her side, Jenni said that was exactly the case.

“Yeah, and she loved it,” said JWoww, adding of how she feels about her foe:

“I’m coming in scared, because there’s an other side, a woman that doesn’t have as much to lose as I do and doesn’t think logically. She goes to social media and it’s damaging.

Jenni also felt her colleagues “don’t feel what I feel because she’ll never do it to them.”

At this point on the episode, Deena was in her room with her husband and believed that the guys were up to something — which they were.

Curious about what the heck was going on, Deena walked in on the therapy session with Jenni.

And that was where the cliffhanger left us.

Will anyone mention JWoww’s text to Deena, demanding she not patch things up with Angelina, something Jenni didn’t realize everyone knew about?

A preview for next week confirmed it will be addressed.

However, it remains unclear whether Angelina herself will ever join this session, too.

Tune in to next Thursday night find out!