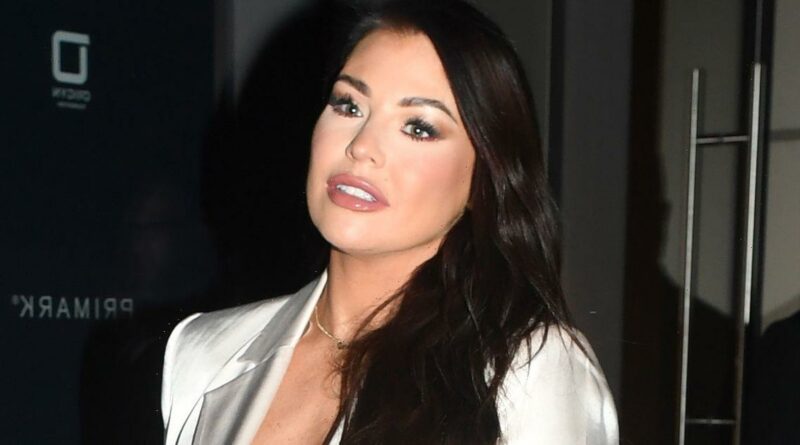 Jess Wright showed off her post-baby figure as she returned to her glamorous self after joining brother Mark Wright at this year's Soccer Aid.

The new mum, who welcomed baby son Presley with her husband William Lee-Kemp last month, looked utterly gorgeous as she donned a silver suit ensemble ahead of the evening's afterparty at Nobu Hotel in London.

TOWIE beauty Jess, 36, wore her brunette mane in a waterfall curly style down one side and stunning smoky eye makeup and bronzer for the event, finishing off her look with mulberry lipstick.

She then donned a slinky satin jacket and matching trousers with a white top underneath that showcased her curves perfectly.

The star accessorised with an oversized white ruched clutch bag and heeled sandals, as she was spotted strolling to the hotel.

The mum-of-one also wore a selection of silver rings, white nail polish and a dainty diamond necklace to top her outfit off as she partied at the swanky hotel.

Earlier on at Soccer Aid, Jess joined some pals and others assisting UNICEF on the phones as people at home watching the charity match could call in to donate money.

The reality TV star wore an official black hoodie and filmed herself joining in with the festivities as Robbie Williams sang his classic hit Angels for the crowds.

With fireworks going off and stands packed with fans, Jess beamed as she cheered along for her brother.

As the match continued, Mark then managed to score a goal, prompting a rapturous roar from spectators.

Jess squealed and celebrated her brother's win as she fist pumped the air in her Instagram stories too.

Later on, Mark was also spotted celebrating the successful match as he changed into a navy tracksuit for the afterparty.

The reality favourite-turned-presenter wore his mousy brown locks in a loose natural style and was laden-down with bags and sports gear in his hands.

Jess and Mark's sister Natalya, 21, also posted a cute selfie with the former as they were getting ready to celebrate the evening.

"She's back," the younger sibling gushed as they pouted by the front door.

For all the latest TV and Showbiz stories, sign up for OK!'s daily newsletter here.