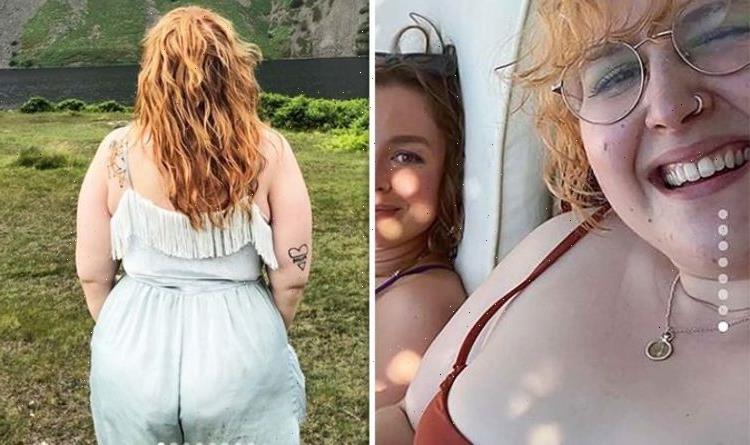 Honey Ross: It’s ‘important to show you can be fat and happy’

Jonathan Ross’ youngest daughter, Honey Kinney Ross, 24, has shared a candid message about the difficulties she has faced, as well as falling “in love” as she reflected on the past year. The podcast host rang in the New Year with a photo of her posing in a red bikini as she sunbathed with friends.

She paid a sweet tribute to her boyfriend, Zane Saz, 24, with a loved-up snap of her hand resting on his knee as he drove.

In her 2021 roundup Honey also included snaps of her partying, having fun with friends and exploring the countryside.

The body positivity activist made sure to show her 57,000 followers that there were some lows this year too.

She included an intimate photo of her alone in floods of tears.

Alongside the collection of images, Honey wrote: “The highs were high, the lows were low.

Honey and Zane celebrated their one-year anniversary in November.

They marked the milestone with a romantic spa session and Honey shared the moment on her Instagram Story, saying it had been a year of “pure love”.

Before settling down with Zane, Honey admitted she found dating hard as a plus-size woman.

Writing in The Sunday Times, she said: “In my experience, as a fat person, you’re either desexualised completely or oversexualised to the point of fetish.”

Honey explained that she gets “a lot of sexual attention” on social media, but men would not chat her up in person.

She continued: “Strangers and mutuals alike are privately trying to get my attention.

“But note the word ‘privately’, most of these men who message and follow me would never publicly like or comment on my pictures – their desire for fat bodies is their dirty secret.”

Honey is the youngest child of TV presenter Jonathan Ross and his wife Jane Goldman.

She has two older siblings, Betty Kitten, 30, and Harvey Kirby, 27.

Jonathan has previously revealed that Honey is teaching him to be ‘woke’.

In an interview on Loose Women, he said: “My kids are very aware, not so much my son but my daughters, my youngest daughter has set up a thing called Pink Protest, which is a feminist group.

“So, I learn a lot from her, and I see a lot of things on her Instagram, which frankly I wish I hadn’t seen, so I kind of know what the modern world is about.”