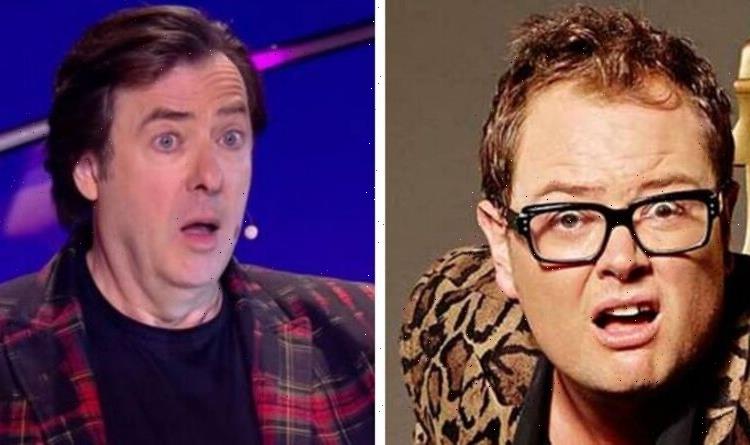 The Masked Singer judge Jonathan Ross spoke fondly of the fellow star, who he has declined to name, but shared that the pair had bonded over European cinema before the other man in question made his move. However, despite being invited on a date that he says could have made a great story for the future, he decided not to go.

I think he was someone who always swung in each direction

“I think he was someone who always swung in each direction, but Hollywood being what it was, he wasn’t out there,” Jonathan mused on openly gay comedian Alan Carr’s podcast show, Life’s A Beach.

“He asked me on a date because we were discussing Pedro Almodovar – a brilliant director, and an openly gay man,” he continued.

“And I think it was my love and knowledge of foreign films, [in] particular his genre, his canon of work, that made him think I was up for a little bit of action.

“Maybe I should have gone!” he joked.

Although the identity of the star was never disclosed to the public, Alan teased that he had been told off-air, speculating of the mystery man: “I never would have had him down as gay.”

Jonathan once joked on Twitter that he was “pretty gay” himself, adding that his childhood bedroom had contained photos of Starsky and Hutch and Cilla Black.

However, Alan is unlikely to have made the same moves on Jonathan, as it was revealed During the podcast, Alan and Jonathan explained that the pair are distantly related to each other.

Meanwhile, Jonathan is happily married to his wife Jane, a former showbiz journalist and scriptwriter.

Though he is in a heterosexual relationship himself, he is accepting of alternative sexualities, not least due to his own experience of it in his family.

His daughter, Betty Kitten, is openly gay, having revealed she’d had crushes on women growing up but did not realise her full identity until reaching her late teens.

Jonathan told Gaydar Radio that he loved her and that her sexuality was none of his concern, adding: “My answer to her bringing a girl home [to the family home] is ‘great.'”

“I love my kids, no matter who they are and what they do.”

Last year, Jonathan made a potentially embarrassing revelation about his own sexuality after he shared that his first sexual experience had involved a hoover and an orange.

He’d been given the offbeat idea when reading sex tips in one of his mother’s magazines.

“I became very interested in women’s magazines and would read my mum’s to try and pick out clues as to what women were,” he revealed on Rhod Gilbert’s Comedy Central show Growing Pains.

“One section said, ‘How to get your man better at oral sex’,” he explained.

“It said, ‘Peel the orange and the whole in the middle, insert your tongue’, so I felt, ‘This is something I need to learn.'”

Causing listeners to later exclaim that it was too much information, he also explained the significance of the hoover.

“I’d read that female-to-male oral sex could be replicated with a Hoover,” he explained, “[but it] was a very uncomfortable experience and not pleasant for anyone.”