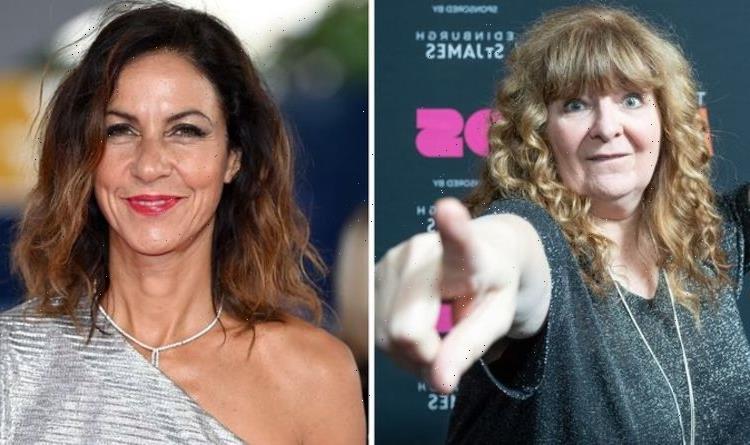 Julia Bradbury provides tips for having a mastectomy

In November, Julia Bradbury, 51, took to Twitter to share a video showing all the signs women should look out for regarding the disease.

Goodness me Janey, I had no idea

“Needing to wee more often. Confusingly these can also be symptoms of less serious conditions like IBS +ovarian cysts… Head to  @OvarianCancerUK for help & advice.”

On Thursday, the stand-up comedian reposted the tweet to her followers as she mentioned to her 239,000 fans that Julia had ultimately prompted her to get her symptoms checked out by a doctor.

After visiting her doctor last month, Janey discovered that she was battling ovarian cancer and subsequently decided to cancel her remaining stand-up tour dates to focus on her health.

She tweeted Julia in an endearing post, which read: “Dear Julia, this is the tweet that stopped me in my tracks, I was in Aberdeen on tour and I took note.

“I had all these symptoms so when I got home, I went to Docs and was diagnosed with ovarian cancer THANK YOU.” (sic)

Julia, who underwent a mastectomy after being diagnosed with breast cancer earlier this year, was clearly moved by the revelation as she shared a few sweet words in a tweet to the 60-year-old.

“Goodness me Janey, I had no idea,” she said.

“I knew of your diagnosis but didn’t realise this was the post that promted you to check. (sic)

“Truly thankful that the scrolling social media stars aligned & you got checked. As ever, sending you all the healing health you need to get through this.”

Earlier this month, it was revealed that Janey would undergo a hysterectomy, a surgical procedure that removes the womb.

Patients who undergo this surgery are unable to get pregnant after the operation.

In a moving follow up post, the comedian told her followers that after having contracted Covid-19, she wouldn’t be able to have the surgery until early next year.

She further explained how “terrified” she was to take on the fight against cancer, yet she assured fans that she would remain strong regardless.

“So in 7 weeks time (due to me having Covid just now) I go in for a full hysterectomy and removal of some lymph nodes,” she bravely shared.

“With the possibility of chemo to follow after they check all the bits they whip out, thanks everyone for kind thoughts I <3 NHS #myreluctantovarianCancerJourney.”

Janey has received an outpouring amount of support from fans and fellow celebs such as actor Johnny Vegas, who said he was keeping his friend in his prayers after she had revealed the devastating news with her fans.

“Hey Darlin’, please come through this,” he said.

“As an idiot living in Glasgow all those years back you took me under your wing and you’ve been minding me ever since.

Even TV presenter Lorraine Kelly chimed in with her well wishes on Twitter, writing: “Lots of love to you @JaneyGodley x”