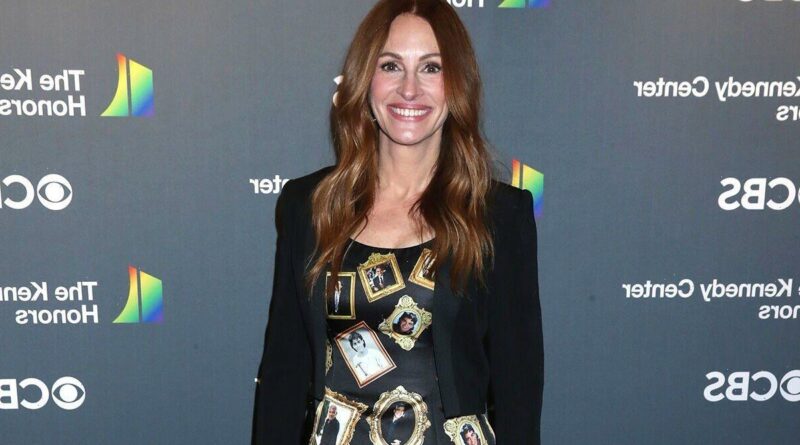 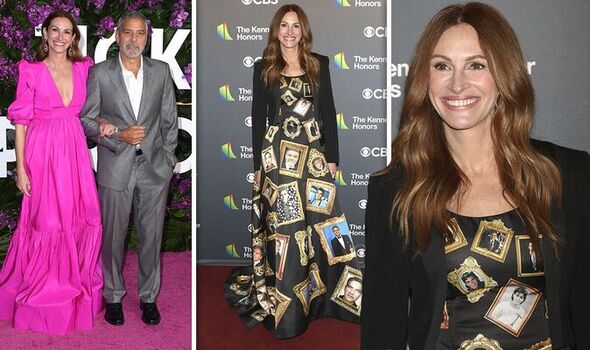 Julia Roberts, 55, turned a lot of heads when she appeared at the 45th Annual Kennedy Center Honors in Washington D.C. yesterday wearing what appeared to be a tribute to her pal George Clooney, 61, who was being honoured at the ceremony. The A-lister had her fans in fits of giggles as she posted the unusual outfit online, branded with a design that featured multiple images of her Ticket to Paradise co-star.

Julia and George recently starred together as ex-husband and wife duo Georgia Cotton and David Cotton in the romcom, which was released a couple of months ago.

The Pretty Woman star showed she had a cheeky sense of humour when she appeared in the show-stopping garment, which featured the Ocean’s Eleven actor’s face over and over again.

Julia paired the dress, which was decorated with at least 30 golden frames with George’s pictures inside them, with a simple black blazer and kept her long brunette hair in natural waves.

The star’s stylist Elizabeth Stewart shared pictures of Julia’s outfit on Instagram, sparking a frenzy with her large fanbase.

“Hysterical,” penned Rose Cacioppo, as Amanda Pesci commented: “Have a best friend who honours you by dressing you! Friendship goal is for these two.” (sic)

Julia Roberts, 55, paid tribute to her friend George Clooney, 61, with a head-turning outfit

The Pretty Woman actress wore a dress that featured multiple framed pictures of the Oscar-winning star.

The garment included snaps from the actor’s early ER days, all the way through to his silver fox era.

The Ticket to Paradise actress, who wore a Moschino frock, was styled by red carpet pro Elizabeth Stewart.

The Notting Hill star wore a fitted black blazer over the long maxi gown and kept her hair down in natural waves.

The pair starred in Ticket to Paradise this year, which sees the actors play ex spouses who team up in an attempt to stop their daughter from getting married in Bali, Indonesia.