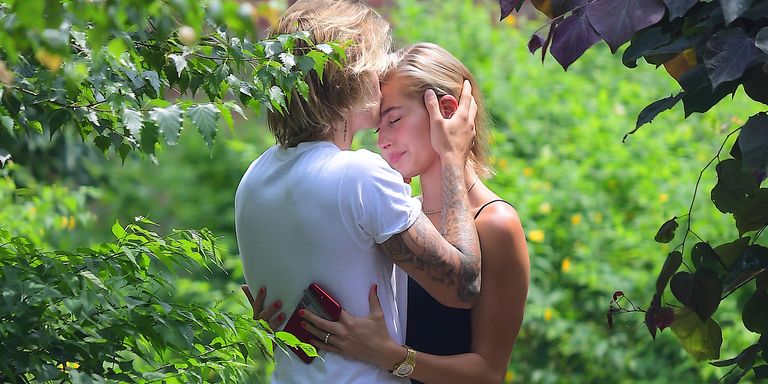 Justin Bieber and Hailey Baldwin’s PDA streak continues. The couple was seen being loved-up in Brooklyn, NY on Sunday, TMZ reports, and the photos look like they were taken out of the most-anticipated romantic movie of 2018.

Surrounded by a backdrop of trees, Hailey embraces Justin while he kisses her on the forehead. They also lock lips and stare into each other’s eyes during the hot summer outing, according to additional photos. Can’t wait to see this film in theaters!

Fans of Bieber and Baldwin’s rekindled romance may already know that this isn’t the pair’s first time showing PDA in Brooklyn. They were previously spotted making out on a waterfront park in June. (This outright show of affection was also very movie-like. Perhaps there’s an ongoing trend here?)

For those still questioning Justin and Hailey’s relationship status, a source recently revealed the pair is “casually dating,” according to Entertainment Tonight.

“Justin and Hailey have always been into one another. They dated in 2016 briefly, and the feelings never really went away,” the insider told ET.

“Justin and Hailey have been casually dating for roughly a month, but things seem to be heating up as the two are spending more and more time together,” the source added.

The Bieber-Baldwin source explained that they “connect deeply over their faith and relationship with God,” which explains the pair’s sightings at church in the past several weeks. They were seen at a service in Washington two weeks ago, and at a conference in Miami in early June, when they first sparked reunion rumors.