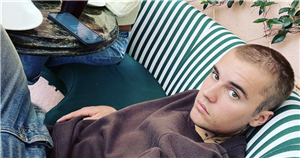 Justin Bieber has shown off a new buzz cut hair style after chopping off his dreadlocks.

The 27 year old Peaches singer's new look has been met with compliments after his previous hairstyle shocked fans.

Justin posted a snap of his new do, which features much shorter hair, on Instagram.

The image sees Justin sat in a green and white striped booth with his stunning wife Hailey, 24, at a marble table. Singer Justin wore a brown baggy jumper and a pair of jeans along with his new hairstyle. Meanwhile, Hailey looked stunning in a lemon yellow chunky knit jumper along with a pair of blue jeans.

As he shared the image 176 million fans, he wished them a "happy Sunday" in the caption.

Fans complimented Justin's new look, which has received a warmer response than his previous look.

One celebrated: "BUZZSTIN IS BACK FINALLYYY". While another said: "YOUR HAIR OMG." Clearly pleased with the reaction to his new do, Justin also shared a black and white selfie to give fans a closer look at his buzz cut on his Instagram story.

It comes after Justin, who is set to appear on the Friends reunion show, received backlash for his dreadlocks hairstyle.

Justin was accused of cultural appropriation as he posted a selfie to flaunt the braids.

The singer shared the photo of his hair in dreadlocks, which were then tied into small buns either side of his head, on his Instagram page. He shared the photo without any caption and fans soon urged him to ditch the look in the comments.

One said: "it’s the way you think this actually looks good i’m-"

Another stated: "I love u so much but no". While a third asked: "Justin bro what you doing wit that hair".

A fourth pleaded: "take these out i’m begging". Meanwhile, Justin was also called out for appropriating the style from black culture.

Stephanie Cohen, co-founder and legal and political organiser at the Halo Collective, a natural hair organisation, told the Guardian: “When I see a white person in mainstream media sporting a black hairstyle, it makes me angry.

“I’m angry because this standard does not exist when a black person simply wears their hair in this way. You can’t just wear something so historically significant and ignore the struggles behind what the hairstyle purports."

But, Peter Andre defended the singer. Writing in his new! column, the Mysterious Girl singer, 48, said: "I’ve had my hair like this in the past – when I was in and out of the surf in Australia and my hair would mat and eventually turn into dreadlocks – and I would never have thought in a million years that anyone would think it was wrong or find it offensive."