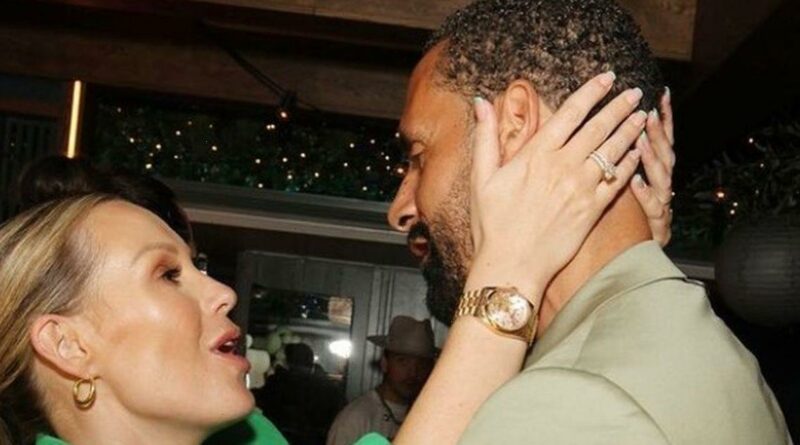 Kate Ferdinand has gushed over her husband Rio in a sweet tribute to mark his 43rd birthday on Sunday 7 November.

The former The Only Way Is Essex star, 30, posted a series of throwback snaps of herself on her Instagram page to mark his special day.

One shows Kate looking gorgeous in green as she embraces her football pundit hubby as they laugh in the candid snapshot.

In the second photo, Kate lovingly has her hands resting on the back of Rio's neck as the pair gaze into one another's eyes. Meanwhile, the third photo shows the pair both stood next to one another as they hold one hand each in the air while another is clutching on to a drink.

As Kate, who recently shared a rare snap of stepdaughter Tia, posted the images of the pair partying, she penned a touching tribute to her beloved man.

She then gushed: "You are my everything. Thank you for being you. I love you endlessly" followed by a green heart emoji. Kate's followers commented to wish Rio a happy birthday, too – including Debbie Bright, who said: "Happy Birthday to the luckiest man in the world @rioferdy5".

Meanwhile, one fan asked: "What song was playing in the last picture?"

The couple have been married since September 2019, when they wed in a stunning ceremony in Marmaris, Turkey – which was exclusively covered by OK!. The former TOWIE beauty is also a proud stepmum to Rio's three children Tate, Tia and Lorenz – who's mum Rebecca Ellison tragically passed away in 2015.

Blonde beauty Kate previously discussed her birth with son Cree, and said she didn't walk for six weeks after her "traumatic" emergency C-section.

She revealed: "I had an emergency C-section, that's like major stomach surgery, so you really have to ease yourself back in and listen to what the doctor said. "I am just listening to my body I'm not doing anything if I feel like it's pulled or it's just a little bit too much I'll just stop.

"I was a bit of machine before I had a baby I realise, just a crazy workout machine, and now I just take it as it comes.

""I'll try and do as much as I can but if it doesn't feel right on my scar I'll just tone it down."

For all the latest news and gossip on Kate Ferdinand and many more of your favourite stars, sign up to OK!'s daily newsletter here