Kate Garraway has detailed her difficult Christmas, her first without husband Derek Draper, who is continuing his recovery from Covid-19 in hospital.

The Good Morning Britain star, 53, had already admitted she was dreading the festive season without Derek, but on Thursday she revealed a number of ‘calamities’ contributed to the emotional few days.

Writing alongside a photo of her Christmas tree in an Instagram post on Thursday, the mother-of-two explained that two pipe leaks led to her London home being flooded.

Wishing her followers a Happy New Year, Kate wrote on it was ‘the last day of a year few will be sorry to see the back of’. 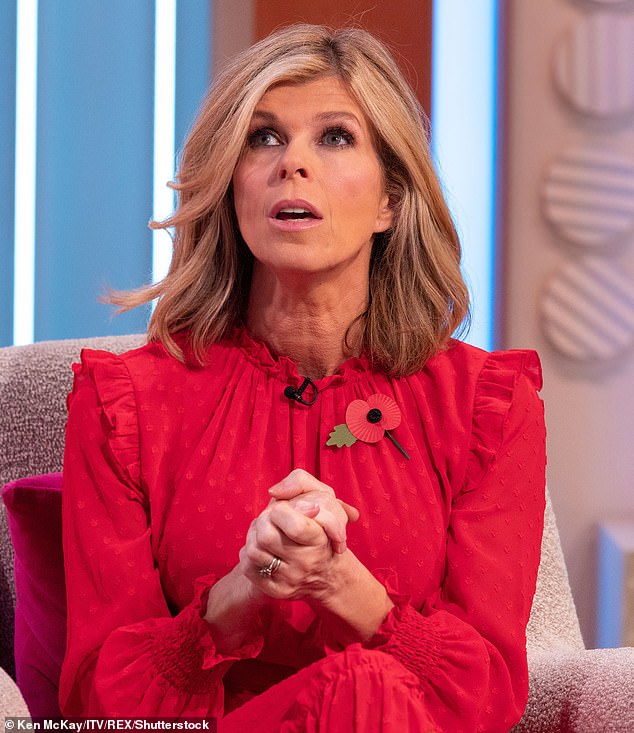 ‘Calamitous’: Kate Garraway has detailed her difficult Christmas, her first without husband Derek Draper who is continuing his recovery from Covid-19 in hospital

Explaining her absence from social media, she continued: ‘Have been quiet for a while – getting through Christmas has been a challenge hasn’t it with all the emotions it stirs in our strange world & no where really to put them – except in hope.’

‘And there is still so much real hope out there. Not just in the extraordinary health care workers & researchers who definitely hold a bright light for the future. But in all the little kindnesses.’

‘We had a calamitous few days in the run up to Christmas – but we got through thanks to some wonderful people,’ she explained.

Kate went on to thank those who had helped her and her two children Darcey, 14, and Billy, 11. 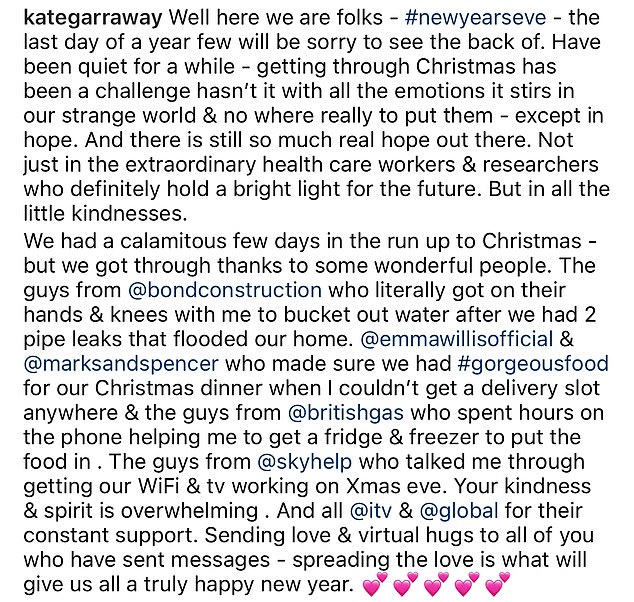 Not very festive: Writing alongside a photo of her Christmas tree in an Instagram post, the mother of two wrote that her two pipe leaks led to her home being flooded

‘The guys from @bondconstruction who literally got on their hands & knees with me to bucket out water after we had 2 pipe leaks that flooded our home,’ she wrote.

Kate also thanked fellow TV presenter and friend Emma Willis and Marks and Spencer ‘who made sure we had #gorgeousfood for our Christmas dinner when I couldn’t get a delivery slot anywhere & the guys from @britishgas who spent hours on the phone helping me to get a fridge & freezer to put the food in.’

After previously revealing her WiFi had broken in the run up to Christmas, Kate wrote that Sky had finally helped her fix the problem.

‘The guys from @skyhelp who talked me through getting our WiFi & tv working on Xmas eve.’ 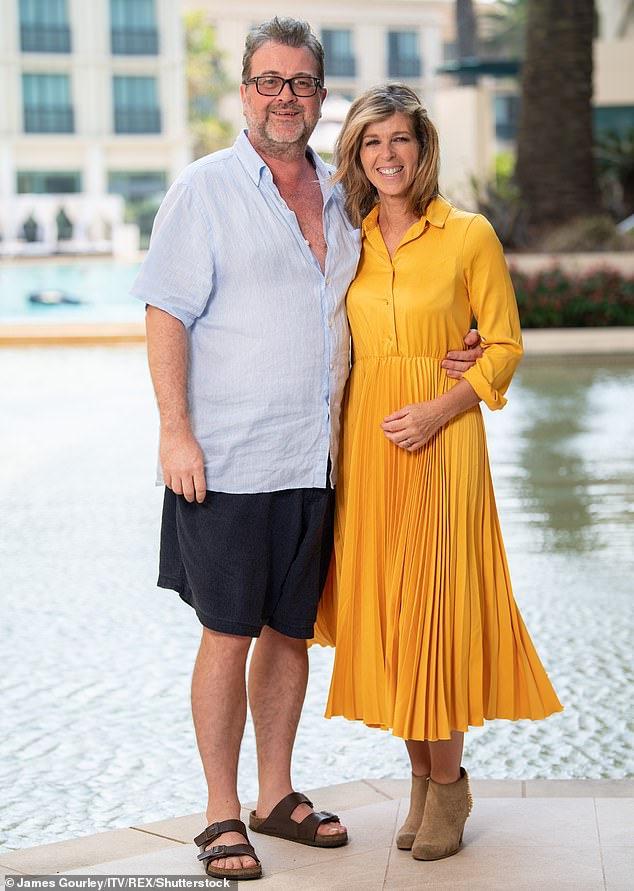 Hospitalised: Derek, 53, was originally admitted to hospital with COVID-19 symptoms in March and remains seriously ill (pictured in December 2019)

‘Your kindness & spirit is overwhelming . And all @itv & @global for their constant support.

‘Sending love & virtual hugs to all of you who have sent messages – spreading the love is what will give us all a truly happy new year,’ the star ended her reflective post.

Derek remains in critical condition but has made minor improvements since he was first admitted to hospital in March. He managed to utter the word ‘pain’ in October, which marked the first time he had spoken following his medical coma.

While Derek continues to recover away from home, Kate said she has been trying to be ‘both mum and dad’ to their two children Darcey, 14, and Billy, 11.

The family had been unable to visit Derek in hospital due to coronavirus restrictions, but the mother-of-two previously said that nurses kindly allowed her to FaceTime him. 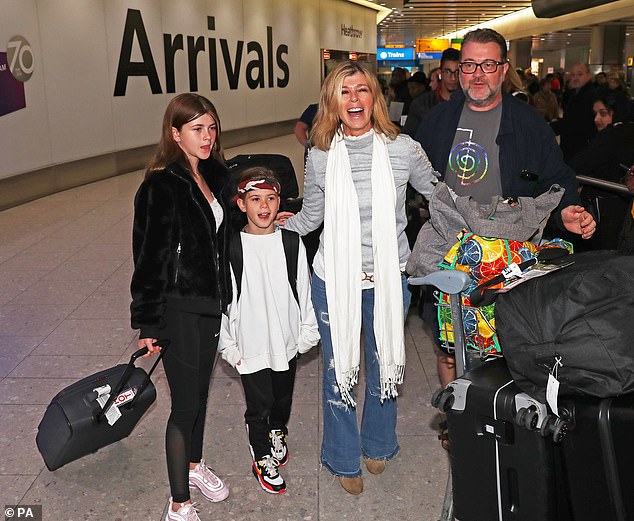 Family: Shortly before Christmas Kate emotionally said that she is trying to be both ‘mum and dad’ for her two children amid her husband Derek’s coronavirus battle (pictured with Derek and children Darcey, 14, and Billy, 11, in December 2019)

Kate previously expressed her hopes of forming a bubble with Derek and the family over Christmas, but the new Tier 4 precautions in London may have delayed any close contact with her husband once more.

The Good Morning Britain presenter was awarded Inspiration Of The Year at the virtual HELLO! Star Women Awards, where she spoke about her difficult 2020.

Speaking in an emotional acceptance speech via video, Kate said that the past few months has brought her ‘closer’ with her two children and she is trying to make sure there is ‘enough laughter’ in their life during the ‘sad’ time.

Talking about her plans for Christmas, Kate emotionally said: ‘If you’ve lost someone due to COVID or lost someone for whatever reason, I think Christmas is very tough.

‘So I’m lucky that Derek is still with us and we still have hope for next year but it is hard to know how to plan because we have very specific traditions. 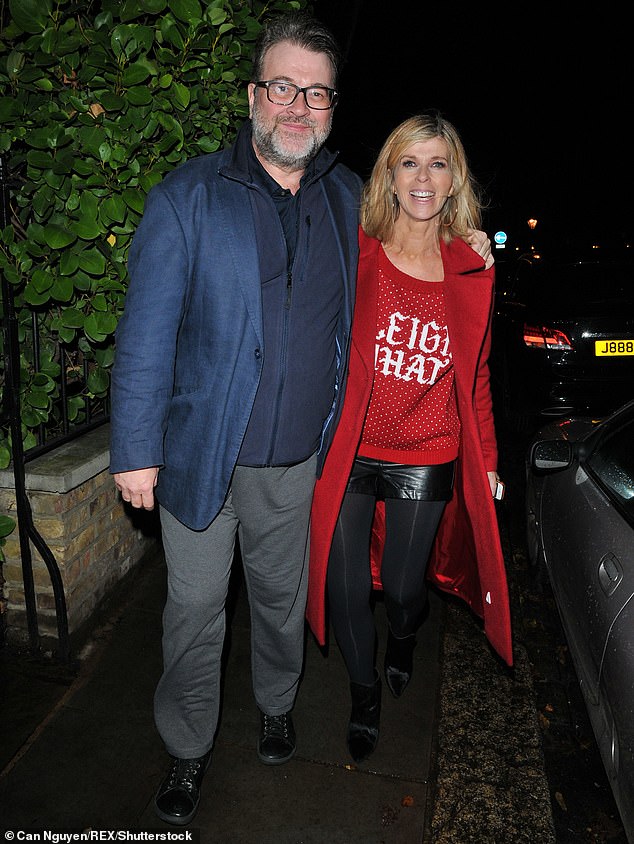 Tricky: The star said she wanted to avoid ‘if possible’ having Christmas day with just herself, and the children adding: ‘I think that would make Derek’s absence feel huge’ (pictured December 2019)

‘We’d always go to Derek’s parents’ on Christmas Eve and we’d go to church. I don’t think any of that’s possible because we need to stay close to Derek in the hospital.’

Kate said that she is trying to form new traditions with her two children and that her GMB co-host Ben Shephard has sweetly offered to help over the festive period.

She continued: ‘So I’ve been talking to the children about forming new traditions and I think we’re going to have a Christmas season, so we’ve already watched Nativity. Key moment.

‘You can imagine how delighted the neighbours are when that goes up – I think Ben Shephard’s offered to come and help.’

A timeline of Derek’s coronavirus battle

Kate revealed she and Prince Charles had got ‘relatively close’ at the Prince’s Trust Awards on March 11 – Charles was diagnosed with coronavirus in mid-March.

‘He said he had a headache, numbness in his right hand, and was struggling to breathe,

‘I rang Dr Hilary (Jones) and tried to get through, he talked to Derek. He said put me back on, I think you need to call an ambulance’

Derek, 52, was taken into hospital on March 30 and remained in an unresponsive condition.

Kate and her children isolated at home after she displayed ‘mild symptoms’.

‘I’m afraid he is still in a deeply critical condition, but he is still here, which means there is hope.’

Kate said: ‘The journey for me and my family seems to be far from over as every day my heart sinks as I learn new and devastating ways this virus has more battles for Derek to fight.

That month, Kate and her family took part in the final clap for carers

She said: ‘I’ll never give up on that because Derek’s the love of my life but at the same time I have absolute uncertainty’

On June 5, Kate revealed Derek is now free from coronavirus but continues to fight against the damage inflicted on his body

On July 5, Kate revealed Derek has woken from his coma but he remains in a serious yet critical condition.

On July 8, she announced she would be returning to GMB, after being urged by doctors to ‘get on with life’ during Derek’s recovery.

She added that Derek had ‘opened his eyes’ after waking from his coma, but has been told his recovery could take years.

On July 13, Kate returned to GMB for the first time since Derek was hospitalised.

On August 14, Kate reassured GMB viewers that Derek was ‘still with us,’ but it was ‘a waiting game.’

On August 19, Kate revealed she celebrated Derek’s birthday with their two children, and described the day as ‘challenging’ for her family.

At the end of September, Derek reportedly becomes the longest surviving patient with coronavirus after spending 184 days in and out of intensive care.

Kate reveals Derek has lost eight stone during his battle.

The presenter announces she is returning to her Smooth Radio show so Derek can hear her voice.

On October 30 Kate reveals that Derek has spoken for the first time in seven months, saying the word ‘pain’ to his wife, who watched on ‘in tears’ over FaceTime.

Kate says a day later that her husband no longer needs a ventilator to breathe.

Kate reveals her family car has been stolen in latest ‘body blow’ to her family life, as kind-hearted fans offer their cars to help.

She says she feels ‘physically sick’ at the prospect of facing her first Christmas without Derek.

The GMB star tells viewers it is her dream to visit Derek on Christmas Day.

She also reveals she missed two weeks on GMB after her children were exposed to the virus, but thankfully she and the kids tested negative.

On December 17 Kate has an emotional conversation live on GMB with two nurses who treated Derek when he was first admitted to Whittington Hospital in North London.