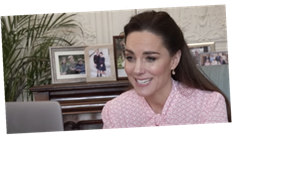 Kate Middleton has unveiled a never-before-seen photo of her kids Prince George,Princess Charlotte and Prince Louis.

The Duchess of Cambridge continued on with her royal duties following Meghan Markle and Prince Harry's explosive interview with Oprah Winfrey as she appeared on a video call with the youngest solo female to have ever rowed the Atlantic, Jasmine Harrison, on 8 March.

The 39 year old looked gorgeous in a pink pastel pussybow blouse from Boden, which costs £80, for the online meeting, which was recorded on 2 March.

Kate styled her mane back in a half up, half down 'do and wore a full face of make up, including bronzer, a smokey eyeshadow, mascara as well as pink lip gloss to go with her shirt.

In the background there could be seen a variety of different photographs of her kids, including one that has never previously been shared publicly.

The snap sees George, seven, sitting in the centre with his youngest sibling, Louis, two, on his left while his five year old sister sat smiling next to him on his right.

While it's unknown when the photo was taken, there's speculation that it may have been from George's seventh birthday last July when he wore a multicoloured camo T-shirt.

During Kate's conversation with Jasmine, the rower explained how being out at sea alone for 70 days allowed her to "appreciate the world we live in in a way we can't when life is busy."

She also told Kate how she wants to "change male perspectives on females" and hopes her efforts will shift the perception for "people that think that something can't be done and it can be".

Clearly impressed, Kate told the 21 year old: "You're inspiring loads of other women and young girls to follow in your footsteps."

The appearance came hours after Meghan, 39, and 36 year old Harry's Oprah Winfrey interview aired in the US. During their tell-all chat, the Duchess of Sussex claimed Kate made her cry ahead of her wedding.

The soon-to-be mum-of-two opened up about reports of a rift between herself and the Kate and said the press wanted “a hero and a villain”.

Meghan, who also said she had suicidal thoughts during her time on the Royal Family, claimed that despite reports that Meghan was the one who drove Kate to tears days before her nuptials to Harry, it was in fact the other way around.

When asked by Oprah about the tabloids' claims Meghan had made Kate cry days before the royal wedding, she said: “No, the reverse happened.”

She added that she “didn’t want to be disparaging to anyone“ but Kate was “upset about something“ over an issue with a flower girl dress.

She added that 38 year old William's wife “took accountability“ after Meghan was brought to tears but insisted there was no confrontation between the pair. Meghan also added that she will not go into to detail about it because Kate apologised.