No more bad blood? Katy Perry sent an olive branch to Taylor Swift’s dressing room on Tuesday, May 8, signaling that their long-running feud might be officially be over.

“Thank you Katy,” the “I Did Something Bad” singer, 28, captioned a video from her Instagram Story on Tuesday. She also included a pink heart emoji.

“So I just got to my dressing room and found this actual olive branch. This means so much to me,” Swift, who kicks off her Reputation tour in Arizona on Tuesday, said in the clip.

Fans can also get a glimpse at the note – which begins with “Hey old friend” and seemingly includes a sticker of Perry’s dog — attached to the giant olive branch. 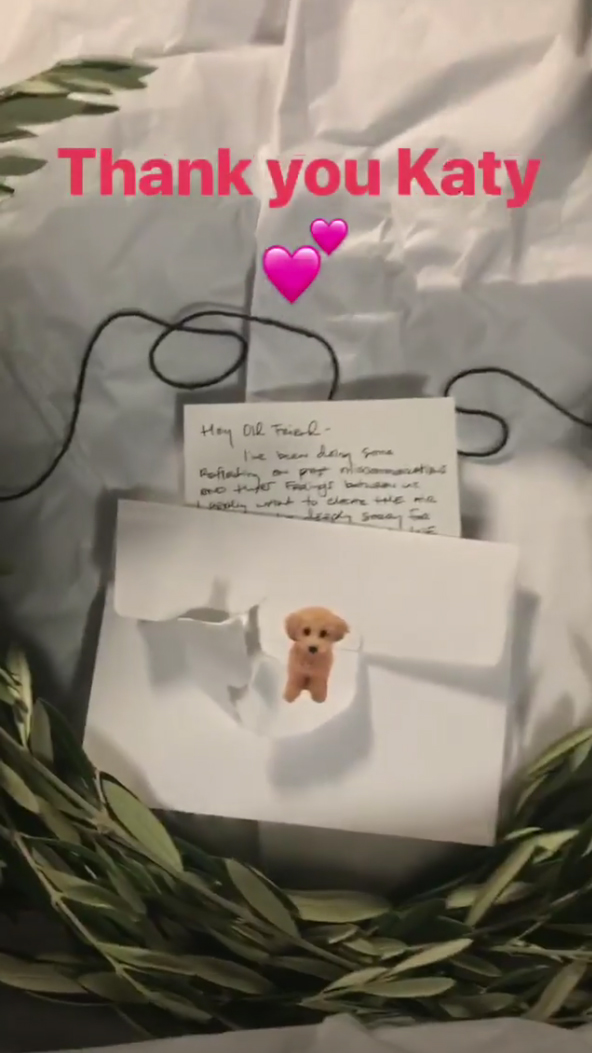 After professing their love for one another on Twitter in 2009, things turned sour between Perry, 33, and Swift when the latter told Rolling Stone in 2014 that another singer stole one of her backup dancers.

While Swift never named Perry, fans put two and two together after the “I Kissed a Girl” crooner seemingly compared Swift to Mean Girls’ Regina George after the interview was published.

“Watch out for the Regina George in sheep’s clothing…” Perry tweeted in 2014. She confirmed to Billboard the following year that the tweet was aimed at Swift.

The American Idol judge first publicly apologized to Swift during a June 2017 interview with Arianna Huffington.

“I am ready to let it go. I forgive her and I’m sorry for anything I ever did, and I hope the same from her,” she said at the time. “I love her, and I want the best for her. And I think she’s a fantastic songwriter, and I think that if we, both her and I, can be representatives of strong women that come together despite their differences, I think the whole world is going to go like, ‘Yeah, well we can do this.’”