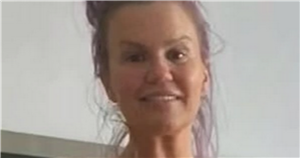 Kerry Katona has proudly shown off her new breasts after getting reduction surgery.

Documenting the surgery on Steph's Packed Lunch, which aired on Tuesday, the former Atomic Kitten singer couldn't contain her excitement and nerves as she prepared to go under the knife.

"The wait is over! It's time for the surgery! When I wake up, I'll have a new pair of breasts," Kerry delightedly told cameras in the hospital.

After waking up from the four-hour operation, the 41 year old said she was thrilled with her new DD cups as she joked that she now had "nothing to rest her arms on".

During the show, Kerry also spoke candidly about her regrets for getting a boob job in the first place.

Kerry added: "It's time to get them to go smaller. I'm suffering really bad with my back."

"My breasts were so big and so heavy, and I looked out of proportion. I still suffer with a bad back, but it's nowhere near what it was."

Kerry quit after a harrowing two episodes of the Channel 4 show left her feeling she couldn't continue to be "shouted at".

She explained that she couldn't handle the intensity of the instructors, and at one stage, Chief DS Ant Middleton's words transported her back to being shouted at by her ex-husband, the late George Kay.